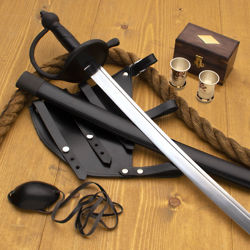 #930000
This box has all the booty a swashbuckler needs to get started - a sword, leather frog, eye patch, and a set of shot glasses for you and your mate. 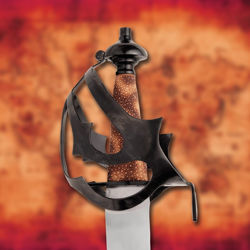 #501690
The design of the guard on this pirate cutlass allow it to be used both left handed and right handed. The high carbon steel blade is tough enough for just about any adventure. Includes matching leather scabbard and suede baldric.
$324.95 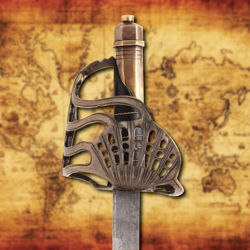 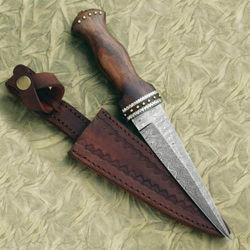 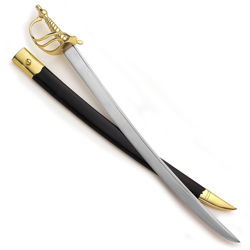 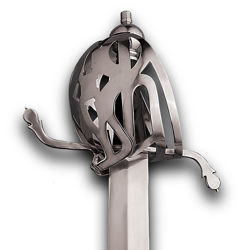 #500920
This cutlass has a double edge for the first 9" of the blade and has a basket-hilt for protection. Includes scabbard. Overall 31-1/2 inches.

#402118
This exotic knife modeled after the Jambiyas of the Arabs, found in Persia and India, has a 1055 high carbon steel blade. Solid hardwood grip with decorative rondels. Hardwood scabbard covered in thin black leather with nickel tip. Worn at the stomach under a sash or belt. Overall length 14-3/8 inches. Comes factory sharp.
$69.95
;

This is an AMAZINGLY beautiful piece. The pictures don't do it justice. The handle and guard are amazing! All my pirate friends are green with envy. Can't say I'm a huge fan of the Baldric that comes with it, but it is nice that it is added in.
Reviewed by: David, July 10, 2020