Historically, the claymore and the basket-hilted broadsword are the two most celebrated Scottish and Celtic swords. The claymore was a big medieval sword that was used well into the Renaissance period; it was most effective when wielded with two hands. The basket-hilted broadsword was used from the 16th century onwards. This sword was lighter and more versatile in battle; its importance to the clans was underlined when firearms entered the fray and made armor and the claymore somewhat ineffective. Basket-hilted broadswords were essential for the clansmen and one of their favorite fighting styles was a broadsword in one hand and shield (targe) on the other. Later on, the Scottish military was issued with a similar sword called the backsword, as only one side of the blade was sharpened.

Museum Replicas offers a broad range of Scottish and Celtic weapons including claymores, basket-hilted swords, and short swords. Two of the blades in this excellent selection are inspired by iconic figures in Scottish history – William Wallace and Robert the Bruce. All weapons are crafted of top-grade material by the finest craftsmen in the field. The details are exquisite and on point and the swords do justice to Scotland’s glorious past. Browse through our collection, pick one (or more) of these classics and let loose the Highlander in you! 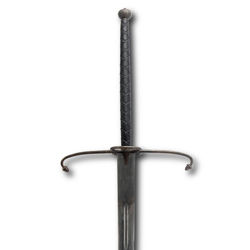 #501731
The Lowlander sword is a large two-handed blade that has Gaelic origins. This Paul Chen sword faithfully replicates a surviving museum piece. Made of 1566 high carbon steel.
$314.95 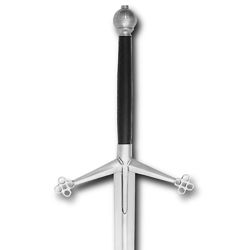 #501730
Satisfy your desire for long-bladed swords with this full-sized claymore. Made by Paul Chen based on surviving museum models.
$260.95 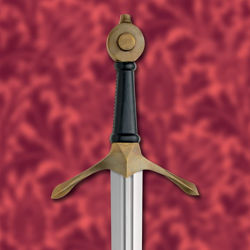 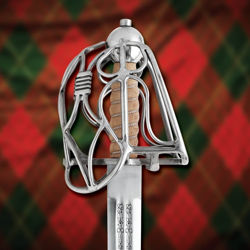 #501544
This version of the broadsword has a high carbon steel blade with double fullers and an intricate wire basket-hilt. Comes complete with a matching black leather scabbard. Overall 38-1/2 inches.
$349.95 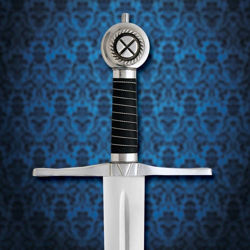 Sword of Robert the Bruce 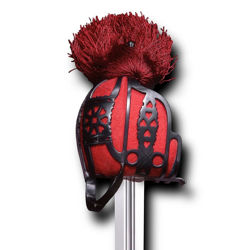 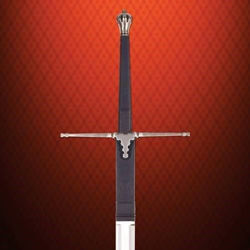 I love the look of this sword when I first saw it on here and had to have it, the sword itself feels good in the hand, it’s a little top heavy but it still works. Highly recommend this sword
Reviewed by: Jonathan , June 15, 2020

Review of: The Bannockburn Sword

I was not sure what to expect when I picked this up on the deal of the day, but I was pleasantly surprised. It is one of those swords that shows better in person. The blade has authority but the hilt is large enough for a second hand if needed. Everything is right and tight and the double fullers a executed beautifully.
Reviewed by: Dan, January 20, 2020

I saw a photo of the sword was copied from.  It was in the National Museum of Antiquities in Scotland and the sword was dated circa 1570.   The Windlass reproduction looks very much like it.  This is a HEAVY sword!  The hilt is so big I can get both of my long slender hands in it, (one on either side).  All of the pieces of the basket are very thick. The blade is well made and substantial.  The etchings on the blade are actually slightly cut into the blade, not just painted on.  I haven't cut anything yet but will once I sharpen it.  I am impressed!  If you get it you may want to check out Youtube's Matt Easton on Scholagladiatoria to learn exercises to strengthen your arm for a one handed sword.
Reviewed by: Les, January 11, 2020

This is a magnificent sword! The basket is large enough to fit my middle size hands when wearing a gauntlet. The basket is also fabulously detailed. Depending on how you count them, there are 30 odd welds in it. Balance is 5" above the basket as it should be and is intended to support cutting rather than thrusting. The etching and engraving are tops!
Reviewed by: Max, February 13, 2019

I cannot express how impressed I am with this sword. The quality and beauty of this weapon was everything I had hoped for and more. It is well balanced as a combat blade and simply exquisite as a display piece. I purchased it as a gift for my son, sharpened and engraved and has quickly become his most prized possession. I could not be happier with my purchase!
Reviewed by: Richard, October 31, 2018

I bought this sword as the deal of the day so the price was fantastic!  The sword itself is fairly nice for the price and has a good feel in the hand.  I wish it was peened but so far I have had zero problems.
Reviewed by: James, February 10, 2017

Beautifully constructed!  Quick, sharp and deadly!  This is an outrageously awesome sword.  It literally sings in the hand and moves with the speed of light.  Buy it!!!!
Reviewed by: Sam, April 21, 2016

Wonderful sword! It's a bit whippy, but not nearly as bad as some of their other larger swords. The appearance is fantastic, and very well made. One of my favorites hands down.
Reviewed by: Matthew, November 14, 2015

I bought this sword on a daily deal.  It has become one of my favorite swords in my extensive collection.  It is well made and beautiful.  It does suffer from some whippiness due to its extensive length but it is not too bad, especially considering its size.  Although not historically accurate this sword is one impressive beast.
Reviewed by: Raffaele, December 02, 2014

THis sword is almost identical to the licensed Braveheart sword windlass made up until a year ago. i have 2 of them and could not be happier. massive, impressive and a beautiful. very well made. soo happy they have a new wallace sword again. my advice to anyone is buy it, you will not regret it, before it gets discountinued again.
Reviewed by: sam, November 22, 2013