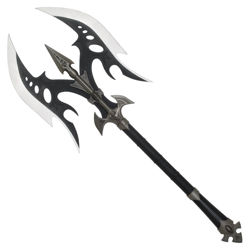 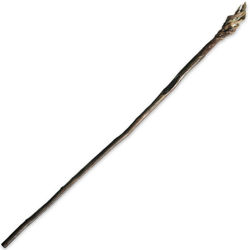 Illuminated Staff Of The Wizard Gandalf

#601088
This special edition of the Staff of the Wizard Gandalf has an Illuminated crown that glows just like the one seen in "The Hobbit: The Desolation of Smaug". 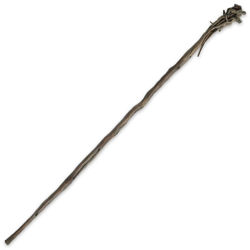 Staff Of Gandalf The Grey

#601087
This replica from the movie is cast in polyresin with authentic details and coloring. The polyresin pipe and spike are removable. Includes a poly stone wall display. 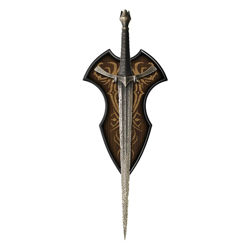 #404510
From The Hobbit film series, this officially licensed Morgul Dagger has a stainless AUS-6 steel blade, solid metal hilt parts, and a leather-wrapped grip. It includes a wooden wall display featuring a graphic motif of the Witch-king crown. Includes a Certificate of Authenticity.
$139.95 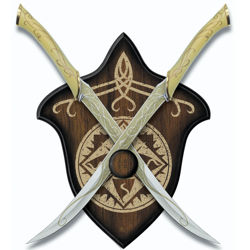 #404509
These officially licensed prop replicas from the Lord of the Rings Trilogy include a display plaque and a Certificate of Authenticity. The knives have razor-sharp stainless steel blades, handcrafted poly resin handles, and solid metal guards and pommels. Features Elven vine decorative accents.
$214.95 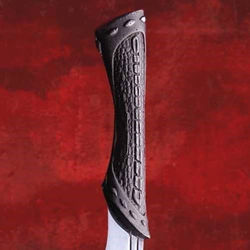 You need fantasy weapons if you are going to war in a fantasy realm. Fists and conventional weapons can only do so much against inhumanly strong opponents who sometimes call upon magic to make things just a little bit harder. The burgeoning growth of the genre in books, movies, and TV has ensured that there is an array of weapons available of different shapes and sizes. For instance, check out Museum Replicas’ wonderful range of fantasy weapons. We have everything, from fantasy axes and hammers to fantasy knives and daggers.

The items in our collection may make you feel like you have superpowers, as fantasy weapons are meant to do. If you need something stealthy to fight off gate guards, try a mythical dagger perhaps? We have those too. If you are planning on ruling Asgard and are looking for a worthy weapon, we offer you Thor’s hammer (Two of them!). For those interested in something a little more earthly and barbaric, check out the licensed replica of the Thulsa Doom dagger from the 1982 movie Conan the Barbarian. Another fantastic product is the Death Dealer Axe from Frank Frazetta Collector Edition line. These are just some of the many amazing weapons we carry in our selection. There is so much more. Check them out for yourself, today!

A very, very stylish knife. The finish and sharpening was great and is very balanced.
Reviewed by: Joel, February 21, 2019

I bought a pair of these a few years back. One of them was absolutely perfect, the other, less so. It had portions of the blackening missing from the handle as well as a hole in the handle. I contacted MR about it, and less than two weeks later, they had everything taken care of (kudos to the customer service team). One of the sheaths was a little loose on the blade, but that’s a vise is for. Both blades are wonderfully balanced. The handles feel odd at first, but with some time you get how they’re supposed to fit in the hand. Only real complaint is about the sharpening. The false edge on the spine is left unsharpened, understandably so, but putting the edge on there as I have, makes the blades just that much more wicked.

This blade is amazing!! Great quality for display, collection, or cosplay.
Reviewed by: Stephen, August 15, 2016

I have had this knife for several years. When I originally bought it the metal tip of the sheath was loose. I used a little GORILLA glue to fix that.
The knife itself was all right and still is. On Samhain (Halloween) I wear it with my pagan ritual robes and the Dark Helmet (sold by Museum Replicas) to give candy to the trick or treaters who come to the door.
Reviewed by: Thomas, October 08, 2015

I'm not really sure what anyone here in these bad reviews were talking about. The pointy ends on the sheath are not that sharp at all. I ordered my knife sharpened, it came that way. Packaging was superb because it was wrapped in bubblewrap. I even got a free item with it, a pocket knife! It shipped the same day I ordered it. The blade itself is fantastic, black with a metal handle. I've got it hanging up right now and it looks amazing! Great job on this one!
Reviewed by: Terry, July 05, 2015

This is a fantastic knife, well worth the price to buy and sharpen it.  I will definately be buying a second one in the future.  The metal parts on the scabbard do seem to come off easily but nothing a touch of glue won't fix and definately not something I feel should drop the rating on this great knife.
Reviewed by: Wesley, October 31, 2012

Just got my Raven Claw in the mail.  I am very pleased.  The knife overall is much blacker than the picture can show.  It is a very dangerous looking thing.  It will make a beautiful addition to my collection.
Reviewed by: Scott, April 18, 2012