The Crusades began in the late 11th century. Between 1096 and 1291, there were eight major Crusades. These military expeditions' goal was to retake control of the Holy Land, stop the spread of Islam and recapture former Christian territories. The bloody, violent and often ruthless conflicts propelled the status of European Christians in the fight for land in the Middle East.

Several knightly military orders were formed during this period, including the Knights Templar, the Teutonic Knights, and the Hospitallers. Their purpose was to defend the Holy Land and pilgrims traveling to and from the region.

Museum Replicas carries a wide & well-researched selection of top-quality clothing, weapons, and armor of this turbulent period. You will be the envy of every knight. Were Richard the Lionheart alive, he undoubtedly would have enjoyed our line of romantic, regal attire and the battle-ready weapons, shields, and armor. 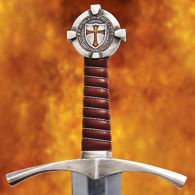 The age of the Crusades saw a wide variety of weapons in use and MuseumReplicas.com has the largest selection of these historical weapons for the enthusiast and re-enactor.

Protecting oneself in battles, whether small or large, was an absolute must during the Crusades. From the knight called upon to defend a kingdom to those jousting in times of peace, the need to defend oneself was essential. Museum Replicas carries an extensive line of body protection, from chain mail and leather protection to helmets and shields. 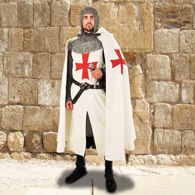 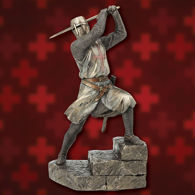 Find historical Crusader flags, as well as statues, trinket boxes, and wall hangings, all honoring these brave knights! Perfect for home and office, you'll find gifts for knights of all ages.

Review of: Ninny Knights Set of 4

Review of: Faithkeeper - Dagger of the Knights Templar

It would have been nice except it had pits (dark) spots on the blade near the cross guard It was listed as the last one so i didnt want to send it back and wait for more to come. maybe it got sent back before. anyway i polished it a lot and got most of it out also i was able to polish out the made in india at the same time. It is still a great looking dagger i am sure it was a one time fluke. I just ordered the faithkeeper sword to go with it.
Reviewed by: kenneth, October 01, 2020

It makes a great addition to my collection. Excellent detail.
Reviewed by: Scott, August 02, 2020

Review of: Battle of the Crusaders Hinged Trinket Chest

My husband loved it, he is a Mason and thought it was really cool.
He did however take red paint and painted the cross on the shield and chest red.
Reviewed by: Terri, May 22, 2019