Museum Replicas offers the finest selection of museum quality swords and sabers. In this section, you’ll find swords with distinctive styles and features to ensure you find a blade that suits your need and taste.

If you need a sword that will see you through battle after battle, pick one from our range of functional swords. For self-defense, nothing levels the playing field like a good sword cane and if you are looking for something to practice full combat safely while preserving the precious steel for the real battle to come, we have practice swords for you.

And of course, if you are just looking for a beautiful display sword, we have decorative swords made for collection and display in your office or den.

Need a sword no one else has? Why not become your own swordsmith and design a masterpiece from the scratch! Nearly all our blades are hand forged and evenly tempered with the state-of-the-art computer controlled kiln to ensure they withstand the test of time.

View this video for more information about care and maintenance of swords. 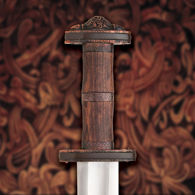 One-handed swords were first developed by the Celts of northern Europe and the British Isles, who fought from horseback. Similar longer bladed swords were quickly adopted by the Romans in the form of the Spatha which was used by their mounted troops. One-handed swords saw use across Europe for cutting through mail armor and leather armor, and slashing (draw-cutting) for mounted and foot combat. As armor evolved in the High Middle Ages into complete suits of plate, the blades developed into more effective thrusting weapons. However, the swords were still capable of inflicting damage with slashing strokes on lightly armored rank and file soldiers.

Museum Replicas offers an array of these fantastic weapons. For instance, the medieval period is well represented by swords of the Crusades and from Viking, Scottish, and Middle Eastern history. These include such weapons as the Sword of King Richard, Ulfberht, and Scimitar. Those more into the Renaissance will find the Schiavona and the Mortuary Half Basket Hilt Swords particularly enjoyable. Also, we offer a wonderful range of American Civil War sabers and swords. These are just a sample of the many excellent one-handed swords in the selection. Our products are made of high carbon steel and other authentic materials and forged with state-of-the-art technology, guaranteeing both substance and style! 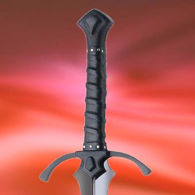 Hand and Half Swords

The term hand-and-a-half is more a modern designation for a range of sword types that featured tapered blades longer than the standard shorter arming swords of the time but without the double-hand grips of larger, heavier war-swords. Many different swords fall into this category, and many of them are as maneuverable as they are surprisingly sturdy. Hand-and-a-half swords roughly fall into two categories. The first tends to have approximately six-inch grips with the blades generally between 34–36 inches. The second type is known as “bastard” swords with grips around five inches or so, and blades 30–34 inches long. Both are light enough to use one handed but allow for two handed use by gripping the base of the pommel. Blade shapes varied to the changes from the mail to full plate armor, but remained of a size that made them effective from horseback.

Museum Replicas houses a collection of hand-and-a-half swords which includes arguably the most famous of all medieval blades – the longsword. We also offer other traditional swords of the period – the bastard sword and the war-sword. Just like our other swords, Museum Replicas’ hand-and-a-half swords are aesthetically pleasing and works of excellent craftsmanship. Check them out now! 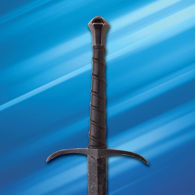 Two-handed swords were known as war-swords in the early Middle Ages and used to destroy an opponent’s shield, shear through mail, and damage helms. They were called great swords during the High Middle Ages and the Renaissance. The blades tended to be slightly longer than regular swords, and capable of damaging full plate armor to the point where the opponent’s movements were substantially impaired. Technically though, the two-handed sword belongs to the Renaissance. These swords were so big – around six feet long – that, unlike previous versions, it was only possible to wield them effectively with two hands. They were surprisingly light at 4–6 lbs and used to counter weapons like pikes and halberds.

Museum Replicas’ collection of two-handed swords encompasses a wide variety of period blades. Longswords, war-swords, choppers and claymores, but it’s not all history. Those inclined towards fantasy will find something as well. Most swords in our selection are crafted of high carbon steel, which makes them extremely hard and able to retain an edge. Our swords adhere to stringent specifications and are a worthy homage to the weapons of the medieval and the Renaissance periods. Browse, pick one, and own the battlefield.

More in our knowledge center 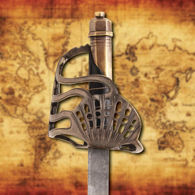 Short swords have seen usage throughout history, from the Legionnaires to Renaissance squires and pirates. In ancient armies, short swords and large shields were a standard armament of the soldiers who fought against the long sarissa pikes of phalanxes. Limitations of copper, bronze, and iron regulated blade length at first. Later, the swords developed across many cultures leading to different types and shapes. After steel had become a common metal used to make bladed weapons, short swords stayed in use as with the Roman gladius which was an effective stabbing weapon.

Museum Replicas offers a range of classic short swords. From the most famous of all short swords, the Roman Gladius, to the iconic Iberian Falcata, as well as cutlasses spanning the Renaissance to the American Civil War. These include pirate, English, Scottish, and Civil War naval cutlasses. High carbon steel has been used for most of the blades in the selection, making our short swords robust and able to maintain a good edge. 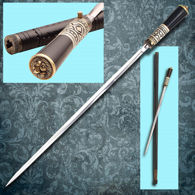 Sword canes first appeared in Medieval Japan. Use spread to Europe and continued into the Renaissance as they were seen as a fashionable way to carry a sword discretely. Sword canes became even more popular in later years when thrusting blades came into fashion. 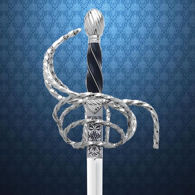 The term “rapier” comes from the Spanish term espada ropera or “sword of the robes,” meaning they were primarily civilian weapons. These swords were faster and lighter in comparison to the others that came before them but far from the stylish blades depicted in television and cinema. In fact, rapiers were closer to medieval swords that preceded them and featured a slender body, a blade over an inch thick, and a heavy quillion. The shape of the rapier swords made them excellent for thrusting strokes and, in the right hands, they were deadly tools.

The rapier collection at Museum Replicas includes an array of blades inspired by these beautiful weapons of the Renaissance. There are several great swords. If you are looking for the archetypal Renaissance rapier then check out the Swept Hilt Rapier, which was very popular during the late 16th and early 17th century. Another rapier takes inspiration from the ones used by the French Musketeers in the late 16th century.

More than other sword types, the rapier lends itself to aesthetically pleasing designs, as you will see in our selection. The hilts and the pommels are beautifully crafted and so are the grips. High carbon steel has been used to make the blades. 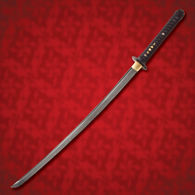 You cannot talk about Japanese history without mentioning the elite Samurai Warrior. Experts at fighting both on horseback and the ground, the Samurai lived by a strict code of ethics. Instilled with "freedom from fear", they trained rigidly and were considered an aristocratic warrior class. 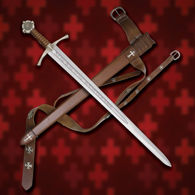 These swords have extra features fit for a Noble. Featuring engraved fittings, fancy scabbard, and, for some swords, matching sword belts! The swords are crafted of the same tough steel and with the same care as the rest of our fully functional weapons, 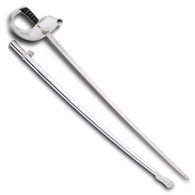 From the times of the Roman Gladiators, wooden swords have been used as a training tool. They allowed a warrior to practice full combat safely while preserving his precious steel for the real battle to come. 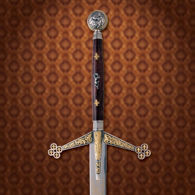 Decorative swords make for excellent wall decor and displays, and can add something extra to any medieval costume or sword collection. Also, they are great as conversation pieces. Museum Replicas’ decorative swords are from leading sword makers from around the world, including Bermejo, Marto, and Windlass Steelcrafts. Our category covers different periods and genres, including Greek, medieval, and Renaissance.

So, what exactly do we offer? Our history and fantasy-inspired selection houses swords from Viking and Scottish history and some beautiful pieces related to the Crusades. No sword collection is quite complete without ancient Greek and Roman blades, and so we have duly covered that base. Further, fantasy is well represented with swords from well-received works of the small screen and celluloid, such as Game of Thrones and Assassins Creed, and classic tales like the Arthurian legend and Robin Hood.

We've made it easy for our customers to decorate a home or dress for an event like a wedding or party. Most of our swords are made of high carbon steel and other authentic materials and ready for the next crusade or to brighten your den or office. Forged by expert hands and state-of-the-art technology, we leave no stone unturned to provide you the very best! Browse our catalog today and walk away with something you can cherish for a long time. 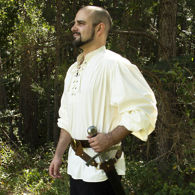 Always be prepared for battle! Our leather sword belts, baldrics and frogs allow you to securely carry your sword with ease.

I bought this sword the first time MR created it.  I have been giving talks in schools for over 40 years about the "Dark Ages" and have used MR swords.  This sword has always been a great hit with my students, it has a great look, the feel is like an extension of the arm not a dead weight hanging out there.  The students love the look of the hilt and the ridge down the center for armor piercing.  When I pull out my book on the Wallace Collection and show them almost identical sword, they know it isn't some "Hollywood sword" but it is like the "real thing".  That is what I have expected from MR from the days of Hank R. to today.  I know who ever buys this sword will enjoy having in their collection as I do.
Bob H
Reviewed by: , February 11, 2021

Beautifully rendered, well balanced and sturdy against my overgrown practice bamboo garden.   Worthy of the most honorable Samurai
Reviewed by: Mike, December 22, 2020