We have stunning tiaras fit for any princess.  If you are not of the royal vein, our leather hats will top off your outfit nicely. 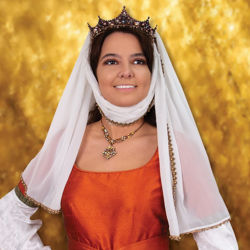 #101713
Queens, ladies and other royalty of middle ages wore elegant mantles as a sign of high fashion. Made of a white, sheer poly fabric, the mantle has been edged on three sides with an exquisite golden beaded trim.
$23.95 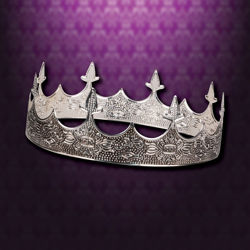 #201637
This tin crown is lightweight so you can wear it all day! Featuring beautiful detail all the way around, this crown has an antiqued finish and fits up to hat size 7-1/2.
$32.95 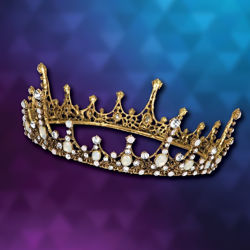 #201641
This all metal crown has a rich antique gold finish and is lavishly adorned with hundreds of cut faux opals and clear diamonds, giving it a sparkling and lustrous look in almost any light.
$49.95 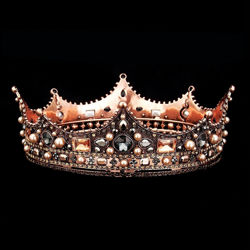 #201614
This heavy crown has all metal construction with a copper finish and features over one hundred faux rhinestones and pearls.
$64.95 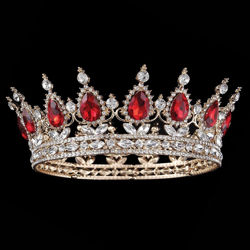 #201612
Available with either red, blue or silver jewels, this lavish crown is made of metal and adorned with hundreds of faux gemstones.
$79.95 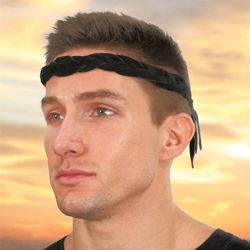 #101700
This warrior rugged headband is made of real black suede leather. Feature studs crafted from high-quality metal. Ties in the back with laces.
$18.95 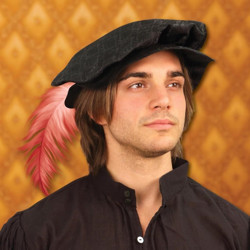 This was bought as a special wedding gift this summer. The crown was crafted very nicely, and the red gem option was perfect as an homage to her birthstone. So many gems  on this and not one out of place or missing- the box was damaged in transit but the internal packaging was safe even for an egg! An added bonus was the set of pins included to secure it upon the head. This makes a fine gift or costume addition for any and all sorts of occasions!!!
Reviewed by: Dwight, September 29, 2019

Great quality but I agree with the other customers, you've gotta fix that sizing chart. I ordered a Large, which should fit no problem but it's really tight on my head.
Reviewed by: JEFFREY, September 16, 2019

Elegant. Tasteful. Simple. What I expected
Reviewed by: eric, January 16, 2019

I purchased two of these crowns for me and my daughter to wear at the Pennsylvania Renaissance Fair it is lightweight easily adjustable and  I picked it because I thought it was pretty and not expensive since I'm only going to be wearing it probably once a year
Reviewed by: MELINDA, March 01, 2017

An excellent quality cap, much better than I expected for the price.  Fits perfectly.  It will be a fine addition to my costume for the Arizona Renaissance Festival.  Completely satisfied with my purchase
Reviewed by: Michael, October 10, 2016

Better than it looks. Although the model is prettier than I am.
Reviewed by: LTC Kenyon, March 20, 2015

Looking at this crownlet I was afraid this was going to be rather insubstantial and easily broken by an active 9yo girl...no worries here! This item is not as thin as it looks in the pics and is easily adjustable without worrying it is going to snap. The jewel in the crown is also very pretty and a very nice touch. This is a very good deal!
Reviewed by: Kurt, January 11, 2011