A sleek boot for pirate or cavalier alike! The soft artificial black leather makes this a comfortable boot for any occasion. Fold-over top flap with laces in back. Hidden zipper for easy on-and-off wearing 17" high Order Men’s S (8-9), M (10-11) or L (12-13).

Write a Review
Write a Review
Review
Good
- Gary, December 02, 2018 | Verified Purchase
Was this review helpful? Yes No (0/0)
These boots are very nice for the price.  The soles are smooth, with minor siping.  They may be a bit slick.  There is a zipper runing from the heel to the top of the calf that is partially covered by the flaps.  The flaps themselves, lace up in the rear.  I found the boots to be comfortably snug around the calf and a bit large around the ankle and foot.  Lacing is nylon cordage, but can be replaced with leather cords for a more traditional look.
- Michael, April 16, 2015 | Verified Purchase
Was this review helpful? Yes No (0/0)
Boots are okay. They are light, and seem sturdy enough considering the thinness of the leather. However, the zipper is in an awkward place, and due to the tight fitting of the boot at the calf, makes it hard to get the boot fully zipped. Customer service was good, and got the boots well before the expected ship date for them. Will have to see how long it takes for them to wear down, but all in all, worth 45 dollars for sure.
- David, December 13, 2011 | Verified Purchase
Was this review helpful? Yes No (0/0)
You get what you pay for!  I ordered these because they were in expensive, but the fit was awful.  First of all, because they come in S, M, and L, each of those categories encompasses a range of actual shoe sizes.  S, for example, includes both 8 and 9.  If you're a 9, you're probably fine.  If you're an 8 (like me), you  have to wear 2 or 3 pairs of socks to make them fit.  If that was the only problem, I would be fine, but there was more....they bent "funny" at the ankles, which was annoying and slightly uncomfortable, and they were so tight in the calf that I had trouble tucking my pants into them and still getting them zipped up--and I'm not a large person.  I thought having the zipper in the rear was extremely unhandy; most zip boots have it on the inside side, which is much easier to deal with.  The icing on the cake was when I stepped into my kitchen and almost took a header when those slick soles met the linoleum.  Also, they just felt cheap.  For half the money I spent on these, I could have gone to Target and bought something that fits better, and then hit the craft store for some sticky-back velcro and $3 worth of pleather to make the fold-over top.

Along with these boots, I also purchased the Dragoon boots, which were $30 more expensive...but also $30 more comfortable.  They have all the same problems, but to a significantly lesser degree.  I'll keep the dragoons, but I'm sending the captain's boots back.

Grain of salt:  I lead a very active, outdoorsy lifestyle as a fire-fighter and a ski bum, so I am used to my footwear being durable and having that "performance fit."  I don't think being female was part of the problem, since I wear men's fire-fighting boots and they're as comfortable as bed-room slippers to me.  I rarely wear anything that isn't a hiking boot or a tennis shoe, so maybe I'm just extra picky about "dress-up" type shoes.  Other people obviously had no problem with these boots.
- Shelly, November 18, 2010 | Verified Purchase
Was this review helpful? Yes No (0/0)
Needed a replacement boot because my other ones were too small.  The zipper made them easy to get on and off.  Walked a day at the faire with no blisters or tired feet.  Easy to clean off the faire dust with a damp rag.  Heel and sole have slight tread but can still be slippery on smooth surfaces.
- Christopher, April 12, 2010 | Verified Purchase
Was this review helpful? Yes No (0/0) 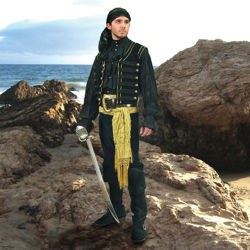 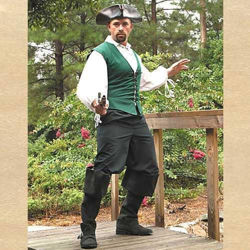 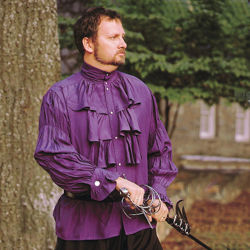 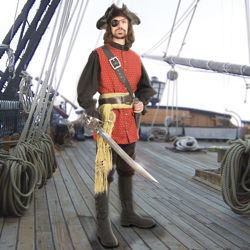 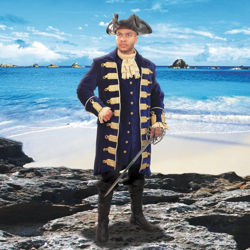 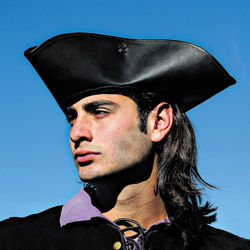