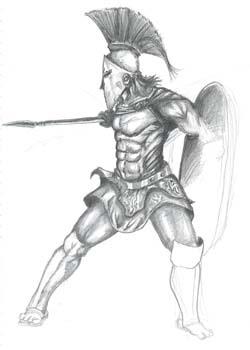 Most, if not all, of the reasons for Spartan dominance on the battlefield can be attributed to their incredibly strenuous and brutal training regiment, the agoge. Even before beginning the agoge, newborn Spartan boys underwent a highly in-depth physical scrutiny to make sure the newborn was without flaws. Any that did not pass the examination were left out in the country to die. Then, between ages five to seven, the boy was taken to begin training. There were no fond farewells, boys were simply taken to live in barracks as a “pack” or unit and encouraged from the start with competitive play against other packs.

By age 10 they had been taught to read and write and their physical exercise was increased. An important activity was dancing (of all things) with their weapons until all movement with the weapons became ingrained and natural. Movement was the key to the warrior’s success and the ability to freely move was paramount. By 12 they would have learned all of the Spartan war songs and their military training would begin in earnest. The journey to manhood also meant they would have their hair cut short, their tunics would be taken away and instead they were given a cloak in its place to fend off whatever the elements threw at them.

mentality they would eat very little always keeping them aggressive and hungry for more. They were allowed to supplement this diet of course by testing their cunning by stealing, but with a heavy punishment if caught- not for stealing, but for being caught! Severely beaten for any reason the instructors could come up with, training was harsh and brutal. Many boys wound up dying during the course of their training due to its brutality. Those that survived, however, became true Spartan soldiers and were unstoppable in battle.

Finished with the agoge at age 20, a young man still had to be selected by a group of older peers before he became a homoioi, a full Spartan citizen. From then on, his life would be devoted to the army. Either away at war or at home training and competing against his fellow soldiers for recognition, a Spartan man was always devoted to combat and bettering his ability to make war. Whereas other cities in Greece were noted for their advanced culture such as theater and philosophy, Sparta was famous for the personal fortitude, character, restraint, and moral fiber of people it produced.