Circa Early 15th Century
Ewart Oakeshott, renowned English sword enthusiast, researcher, and author of crucial books about the sword, described Henry V's sword as "...one of the most beautiful medieval swords to handle I have ever known. ...it is balanced like a good fishing rod."

It is a sword that was designed to be a superb weapon - simple, practical, and of high quality. The enormous, thick pommel looks misleadingly heavy, but is actually hollow. The raised rims on either side were brazed onto an inner iron disc. The recesses in the pommel were gilded with gold and accentuated with painted red crosses at the time of the king's funeral. The sword was hung above King Henry's chantry at Westminster Abbey until at some point it was stowed away in an old chest. In 1951, it was discovered, cleaned (by Mr. Oakeshott himself!), and added to the display of King Henry's other accouterments - his helm, shield, and saddle - in the Abbey museum. It was obviously well-used; the blade appears to be slightly narrowed from multiple sharpenings. The original grip is long gone, the current wood grip is thought to be a rough replacement. This sword is labeled a type XVIII in Oakeshott's Records of the Medieval Sword.

As a prince at the age of 16, Henry was nearly killed by an arrow that penetrated his face. As king, he led a small band of knights and archers to victory over a much larger French force at the Battle of Agincourt, one of the most stunning accomplishments in English military history.

This sword from Windlass Steelcrafts is a precise replica of the iconic sword of Henry V. Like the original, it's a relatively short weapon, designed for fast cutting and thrusting. The blade is slightly hollow ground and the edge is sharpened at the factory. It's beautifully balanced and feels lively in the hand. The pommel is hollow like the original and is appropriately gold plated in the recesses, and has red enamel crosses emblazoned on each side (we used enamel instead of paint for the sake of durability). An accurate, fully functional replica of a true battle sword once used by the king of England. A design with just enough flair for a sense of elegance, but no doubt a pragmatic, effective cutting weapon. Includes top-grain leather scabbard and belt.

Can be personalized with 3 initials for an additional fee. Click here for details on our personalization service and return policy 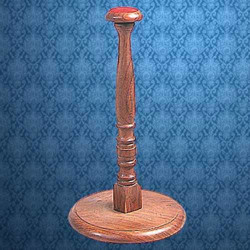 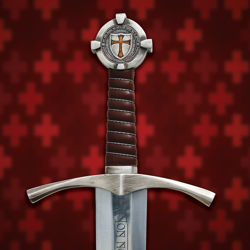 The Accolade Sword of the Knights Templar 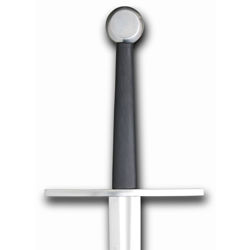 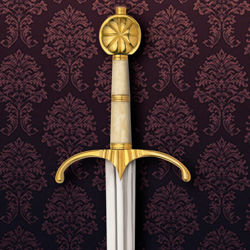 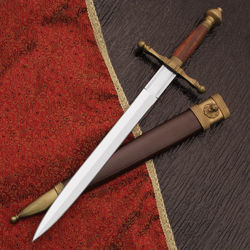 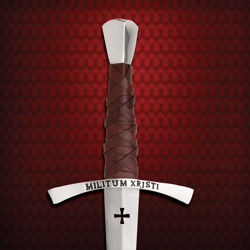 Faithkeeper - Dagger of the Knights Templar