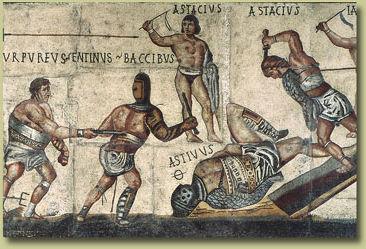 Despite what Hollywood would have you believe, gladiators were not given random weapons, sent into the arena, and told to fight. When someone became a gladiator, they were assigned a specific type and style of fighting and practiced it constantly. A specific type of gladiator only fought another specific type of gladiator as determined by well-established rules. These pairings were intended to provide the combatants with offsetting strengths and weaknesses in an effort to give the best showing. Although underground fights could do what they wanted, official “games” (as they were called) were very strict with following the rules.

Below are the most common and well-known types of gladiators and their usual pairing:

Cestus – Fought with spikes embedded in leather wrappings around their hands. Fought other cestus or occasionally unarmed noxii.

Murmillo – Similar to the Thraex, the murmillo wore a helmet with basic arm and leg protection but carried a tall, oblong shield like the ones carried by Roman legionnaires and a gladius short sword. The murmillo commonly fought the thraex or hoplomachus.

Hoplomachus – Wore a helmet with basic arm and leg protection, a very small, round shield, a gladius and a spear. The hoplomachus commonly fought the thraex or murmillo.

Noxii – Although not considered gladiators, the noxii were still fighters in the arena. Made up of criminals and other undesirables the Emperor and his officials wanted to be rid of, the noxii fought in deplorable conditions with little to no means to defend themselves. Noxii fought animals, other noxii, trained gladiators in “mock fights”, etc.

Retiarius – The retiarius wore no head or leg protection and only had an arm and shoulder guard as armor. This gladiator carried a weighted net, trident, and dagger into battle. The retiarius commonly fought the secutor and sometimes the murmillo.

Secutor – The secutor was armed almost exactly like the murmillo. The only difference in weapons and armor is that the secutor had a very tight fitting, smooth helmet to keep the net of the retiarius from catching. Commonly fights the retiarius.

Thraex – Wore a helmet with basic arm and leg protection, a small shield, and a curved sword called a sica. The thraex commonly fought the murmillo or hoplomachus. 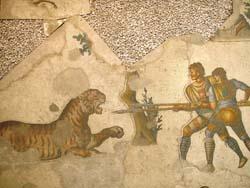 The arenas of ancient Rome, more specifically the Coliseum, were specially designed to allow fights of all kinds: from the standard gladiator match to fights with animals and even large scale naval battles. The marvel of engineering that is the Coliseum is only overshadowed by its bloody and brutal history.