Swords — the Subtle and the Obvious

One of the most exciting things about the study of historical European swords is exploring the immense diversity of their designs and the often subtle ways which variations in a handful of factors produce profound distinctions in performance. Yet, because in the modern era we longer need to rely on long-bladed weapons for their actual intended purpose —and have not for centuries— unfamiliarity with different sword types is commonplace. There is an obvious truth in noting that swords of different shape, size, and center of gravity —not to mention the critical
aspect of cross-sectional geometry —will each feel differently in the hand and each move differently in action. But, it’s when they are of similar characteristics that the matter becomes a much more nuanced issue of subjective experience.

Over the years, one of the things I find that I encounter with regularity among sword enthusiasts is a subtle misunderstanding that imagines swords of a similar design must handle and function in the same way. This view, not uncommon among museum curators, is a mistaken assumption. Despite "families" of any sword type sharing strong similarities, the fact is they typically have major differences in length, width, thickness, taper, curvature, and weight, as well as dissimilar handle and hilt configurations. A change among any one of these elements is no small matter. Like finely engineered sport cars or hand-made musical instruments, they may all work in the
same way but they do so with noticeable individuality.

For the large part, it's true that most all archaic hand-weapons utilize the same basic actions to strike along the same lines. But there are important variances in their use and how they are employed that go way beyond mere design aesthetics. There are considerable distinctions to how different swords are employed, the impacts they can cause, their capacity to ward off other blows, and their versatility in transitioning between cutting and thrusting. 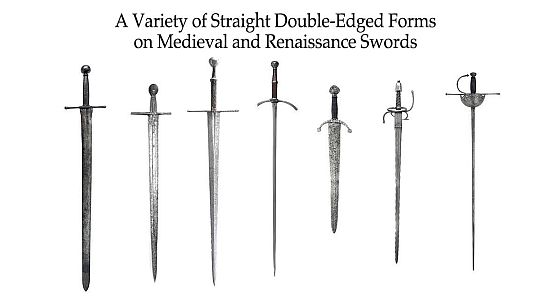 For example, one wouldn't examine a 14th-century arming sword, a 15th century spadone, and a 16th century side-sword to then conclude that they are essentially the same weapon simply because they are each straight double-edged blades. For the same reasons, one wouldn't look at an early Medieval falchion, a 16th century Messer, and any of numerous 19th-century sabers to conclude that, because they are curved single-edged blades, they must all have the same handling characteristics, same center of gravity, and same center of percussion. This is equally true of tucks, rapiers, small-swords, and modern epees or foils.

It's not hard to perceive how a sword of a specific type will favor one particular action over another or that certain types of sword lend themselves more to some actions than will other kinds. While the offensive and defensive capacity of similar forms will always overlap in certain areas, in others one design aspect or another will be better by intention. It's fairly self-evident that any given model is to some degree specialized to achieve a certain level of maneuverability. Comparatively, however, they cannot all deliver the same force from any particular strike —or cause the same injuries. If this were not true there wouldn't be such a great variety in dimensions and form among them.

To some degree it's understandable to mistake sword designs and their evolution as being a matter more about aesthetics and artistic choices of fashion. Today, as modern students we are better able to refine and expand our appreciation for the differences among varieties of sword — both subtle and obvious. After all, this is one major part of the very reason for enjoying the craft. Common sense reveals similar weapons are far from identical in their fighting attributes. Just what those difference are and how they are expressed in practical application is the real question.