Drums beat in the distance, keeping the rhythm of the advance. The hot Greek sun beats down on you under your heavy armor and equipment. The overlapping shields of you and your fellow soldiers keeps you locked into formation, steadily advancing towards your enemy. Several yards out from the enemy line, the order is given to charge. You crash into your opponent’s shield with a sickening crunch; the pushing match has begun. Friendly soldiers behind you push you harder into the enemies’ shields as their allies do the same for them. Placing your left soldier and thigh against the rim of your shield, you push with all your might as you stab through the cracks in the shield wall with your spear. The rank behind you stabs over it. Welcome to phalanx warfare.

Battles would continue like this for over an hour with many men being crushed to death, suffocating in the heat, or being speared by the enemy. Eventually, the line on one side would break and the men would scatter, knowing the battle was lost. These pushing matches were how many experts believe Greek warfare was fought during the late Archaic Age and all during the Classical age, with little variation. But first, what exactly is the phalanx?

The phalanx can best be described as a long line of heavily armored men moving in rhythm with each other. As hoplites carried massive shields (881004), these would overlap with the shields of the men next to each hoplite. You defended the man to your left with your shield and the man to your right defended you. This created a solid wall of bronze with iron tipped spears poking out. Drums or other kinds of musical instruments kept the rhythm for the advance. If anyone ran ahead or fell behind, the solid line would be incomplete and severely weakened as a result. Since the phalanx required much concentration and cohesion to maintain, it was only effective at a walk or slow charge and even then, only on flat even ground. Uneven terrain would break up the shape in a heartbeat. In addition to this, attacked from the sides or rear, the phalanx was slaughtered and as this formation was so slow, being attacked in the flanks was a very real threat. 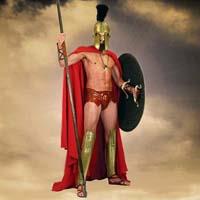 Despite these flaws, in head-on engagements almost nothing could penetrate the solid wall of the phalanx except for another, larger phalanx. The typical phalanx was eight men deep, that is, eight rows of men, and any number of men wide. There are instances of both less and greater ranks of men in various battles though. The hoplite’s main weapon was a spear (600074) between seven to nine feet long. With spears this long, the first two ranks of men would be able to reach the enemy with their spears. Deeper rows would serve as both reinforcements if front row men fell and as pushing weight used to keep pressure on and break the enemy’s line. As a greater physical force than the opponent was required to win, sometimes there would be veteran soldiers in the very rear of the phalanx with swords drawn to “prod” their men on and keep them from faltering.

Philip II of Macedon saw both the potential and limitations of the Greek phalanx and sought to improve it and make it truly unstoppable. He created the sarissa, a spear 18 feet long and held in both hands, rather than the hoplite’s one. As a result, five rows of men could present their sarissa to the enemy! That means there were more spears in the front row than there were targets for them to skewer! The flip side of the coin, however, is that as both hands were required to wield the deadly sarissa, a large shield could no longer be used. A much smaller, lighter shield was strapped to the arm or done away with completely; as was most of the heavy armor. With five rows of spear points presented no enemy could be able to get close enough for the soldiers to need armor. He called his new infantry phalangites, rather than hoplites.

In addition to reinventing the phalanx, Philip II of Macedon added a very heavy and very deadly cavalry element to his army to compensate for the phalanx’s lack of flexibility, speed, and mobility. He added javelin throwers and heavy infantry in addition to a large variety of other soldiers, all in an effort to make his army more flexible and adaptable. With this army he easily defeated Greek phalanx armies and was able to gain political power over Greece. Upon his death, his son, Alexander, took over Macedon and with the powerful phalanx and army developed by Philip, Alexander went on to conquer the Persian empire. The phalanx, with its mobile yet heavy cavalry wing, helped create the empire of Alexander the Great.

The End of the Phalanx

Ultimately, the phalanx’s lack of flexibility, slow speed and enormous vulnerability on the flanks led to its demise. Roman armies, using highly adaptable formations and advanced battle tactics, were able to defeat the phalanx in all its variations. They exploited its weaknesses, avoided its strengths and wound up conquering all of Greece, an achievement never before done. After centuries of total domination on the battlefield, the phalanx became obsolete. It should be noted, however, that various alterations of the phalanx were used in wars and armies millennia later, albeit limitedly.