Croesus' Wealth Lost By A Helmet 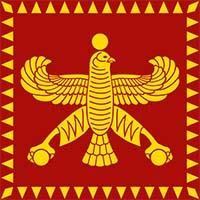 In 547 BC, Cyrus, the Great King of Persia was at war with Croesus, the fabulously rich king of Lydia.  Cyrus’s cavalry forces had beaten the Lydians in the field, but Croesus retreated and rallied his troops in a strong defense of Sardis within its stout walls, but at the same time had bottled himself and most of his army up in the capital.

Cyrus sat down to besiege it, but its walls were very high and strong, and the Persian army consisted mostly of cavalry.  The cause seemed pretty hopeless, and Cyrus was about to raise the siege when a silly accident gave him the town.

standard of Cyrus the Great

One hot and hazy afternoon a sentry on the walls of Sardis took off his shinning bronze helmet and laid it on the parapet of the wall.  He stood there, chatting to a comrade with his back to the parapet, when, lifting his arm to wipe the sweat from his brow, his elbow caught the helmet and knocked it off the wall, and down the rocky slope below.  One of Cyrus’s men, idly watching the wall, saw the flash of the falling helmet – and soon saw a Lydian soldier lazily climb over the wall, down the slope below, pick up his helmet and leisurely climb up again.  There was obviously a path.

The Persian soldier went to his captain, who then went to the King.  That night a picked force of volunteers, guided by the observant soldier, climbed the path, got over the wall, down into the streets and opened one of the gates to let in the strong force which had been positioned outside.  And Sardis fell.  Croesus was captured, and all his vast wealth as well, and Cyrus the Great then added Lydia to his Empire of Persia.  Not through strategy, but bumbling good luck.

Authors note: much of this story is related to you as it was to me by Ewart Oakeshott.  His learning’s through decades made pinning down some details hard and specifics sometimes difficult to substantiate.  However, I’ve never known him to be wrong either, so at least a shred of truth can be taken, if not all of it at face value.