What is a Chainmail Armor? 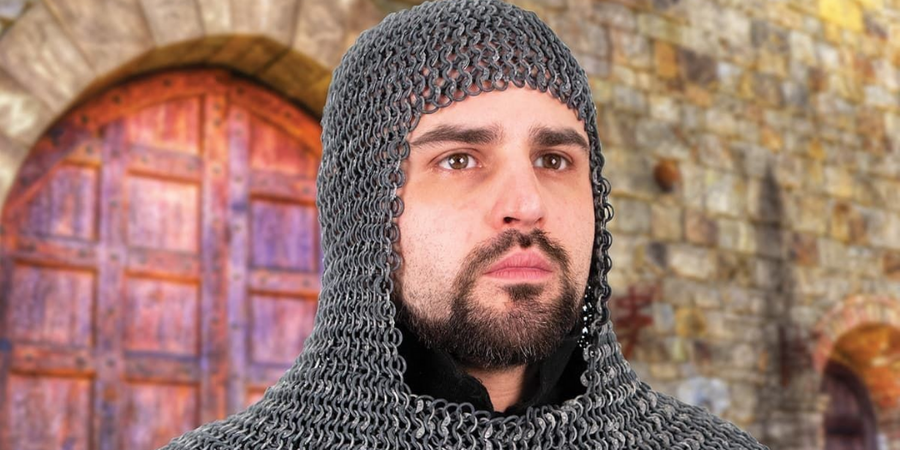 Chainmail armor was the earliest metal armor used by soldiers during the Middle Ages. The armor was made of small metal rings joined together to form closely linked, flexible and protective mesh.
The maille armor (French that meant ‘mesh of a net’) primarily consisted of a two-part composite defense, the mail itself and the padding worn underneath. When worn in this fashion mail offered great resistance to cuts and punctures while reducing the effects of blunt trauma. The design of mails remained virtually unchanged during the time of their use, suggesting that it was an extremely effective form of protection.

Chain mail became popular during the Middle Ages though it was originally thought to have originated in the Celtic regions of Europe around the beginning of the 4th century BC. Many Roman authors have claimed that the Celts invented chainmail. One of the earliest examples of chainmail armor was found at Ciumesti in modern Romania. However, mail armor found from a burial site in Slovakia dates back to the first half of the 3rd century BC, making it the earliest confirmed example of chainmail.
Historically, chain mail armors were inspired by previously existing scale armor. Scale armor consisted of individual small metal plates attached with a leather cloth. This shows that throughout history chain mail was used in many parts of the world including the Middle East, India, Russia, China and North Africa.

The most common form of chainmail pattern was the "four-in-one" pattern, where each link was linked to four others. However, there were many variants found and below are some examples.

Jazerant
The jazerant was a type of medieval light coat of armor that was sewn between two layers of padded leather or fabric. It was largely used in Turkey, the Middle East and Persia. It’s saw use from the 11th century throughout the 14th century. Few versions of these armors were also popular in parts of Europe.

Double Mail
Double mail is mentioned in many sources. While it is fairly certain that a type of armor existed, there is no solid evidence to prove what form it took. Here are a few things we know about these armors:
• The armor was made from links that were twice as heavy as regular mail.
• The links were fastened with two rivets instead of one.
• It had two separate mail hauberks, worn on the top of the other. A light layer of padding was required between the layers to prevent the links from binding to each other.
• The mails were made from smaller links so the material required was twice as much as regular mail.
• Mail was tailored in such a way that the garment overlapped and was fastened at the side, resulting in two layers of mail protecting the front.

Bar mail or sometimes called "Theta mail" (as the links in mail resemble the Greek character Θ), were occasionally used in India. In bar mail, the solid links were made with a strip of metal horizontally crossing the center. Although it is unclear what purpose the cross-bar served on these links. Possibly the design offered a similar resistance to attacks without the additional labor as required in making finer chainmail.

Banded Mail
According to some scholars using the term "banded mail" is a misnomer. Why? For starters it typically doesn't involve any mail at all! Instead, it consisted of mail with strips of leather woven horizontally through alternate rows in the mail hauberks. The Vancouver Anthropology museum has a Middle Eastern example dating to the 15th century. Leather strips were also laced with every alternative row to create a collar that stands rigid around the neck. Such designs were seen in India, Russia and the Middle East. In Europe, this effect was usually created by using a denser weave of mail.

Mail and Plates
The next innovation for mail armor was the development of mail and plates (sometimes called combined mail) construction. It was popular in the Middle East, India and Russia from around the 14th century onwards. Butted mail (a four-link mail with the rings closed in a circle with the ends butted together) was more often used in this construction than in regular mail, yet riveted mail (made out of wire that is coiled into a spiral) was still the most common. This type of armor consisted of slightly convex metal plates of various sizes and shapes joined together with sections of mail to create a defense that was more protective than mail but not quite so flexible. Sometimes brass, copper alloy and even Kabau horn were used for the plates instead of iron.

A subset of this armor is a variety of Roman scale armor where instead of textile or leather, tiny scales were attached to a fine mail backing. The top of each scale was bent back at a right angle and four holes punched through which the rings of the mail pass. Armor made of embossed ridged scales bore a strong resemblance to feathers. A drawback was that producing this type of armor was time-consuming and expensive.

Chainmail was highly effective even against a diamond-hard katana or heavy Claymore. When combined with a padded gambeson (undergarment) or some leather garment, it reduced blunt force damage as well. With flexibility similar to cloth and greater than hardened leather, mail allowed for excellent mobility. Due to the way it draped over the body, its weight was evenly distributed, making it less fatiguing than most other armors. Because it was made of individual links, it was relatively easy to repair if a link was broken, only having to replace the broken link.
Mail was typically made of iron wire, often augmented with punched solid rings. These wires were much easier to obtain than iron plates throughout the ancient and medieval periods.

A lot of labor-intensive time was needed to assemble a complete mail-shirt and complimenting components. As stated earlier, it was excellent protection against slashing weapons and of limited value versus blunt force trauma – unless backed up by a padded gambeson or anything similar. Specialized arrows with extremely narrow heads could easily penetrate the armor as well, though this was not a serious issue historically. Although chainmail could stop a stab from a fat blade, a thin blade could push through some chainmail hauberks (mostly those of low quality).
Now talking about the comfort, as a complete armor system mail combined with gambeson, it was reasonably warm to wear. This caused problems for the Crusader armies and the Norwegian army that invaded England in 1066. In a particular case, when Norwegians left their armor at their ships on a particularly warm autumn day and were left at a serious disadvantage when a fully-armed Anglo-Saxon army showed up.
If you are looking around to add these fascinating armors to your arsenal, check out Museum Replicas! There you can find a number of different pieces of chainmail armor including coifs, chainmail shirts, and vambraces to compliment your look.