The film industry has certainly provided us with many memorable duels and sword fights. From Douglas Fairbanks and Errol Flynn to Russell Crowe and Mark Hamill. There are many we could have listed that would have been worthy of this list, but this is a Top Ten list and here are our favorites:

10) Sword of Ibelin, carried with honor during the Crusade battles by Orlando Bloom in Kingdom of Heaven. This Ridley Scott epic takes place during the Crusades of the 12th century and our hero Balian finds himself a defender of the city and its people. The sword definitely suits such a warrior of the period with its classic cruciform style, and it was large enough to be used with two hands when needed, but was light enough for one. The pommel is stunning with a red, jeweled cross floating withing it. 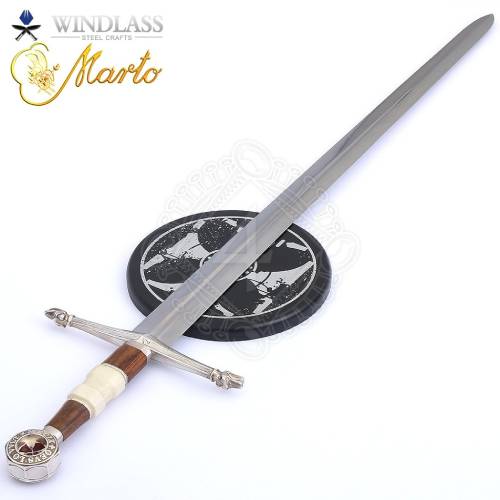 9) Gladiator sword of General Maximus carried by Russell Crowe with authority. Not unlike Spartacus, this brutal view of Rome sees a former Roman General exact vengeance against the corrupt emperor who murdered his family and sent him into slavery which lead to the arena and stunning duels. The Generals gladius is beautiful to behold and holds the attention even when not in battle with its intricate castings adorning the double edge battle blade. 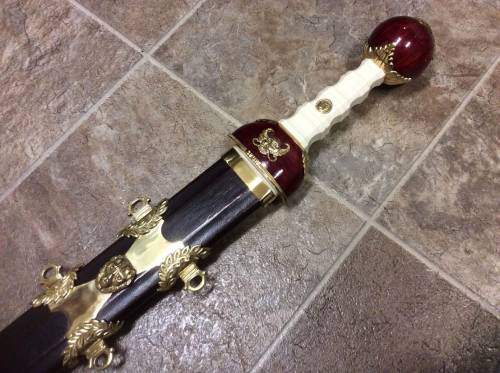 8) Glamdring, carried by the great wizard Gandalf in The Hobbit and The Lord of the Rings. This sweeping epic from Peter Jackson made us all fans of Tolkien. A reluctant Bilbo Baggins goes on an adventure to Lonely Mountain with a group of dwarves to reclaim their mountain home (and their gold) from the dragon Smaug. Of course, this led to the journey to destroy the powerful One Ring and save Middle-earth from the Dark Lord Sauron. The two-hander is used with surprising effectiveness in the hands of the grey beard, Gandalf and holds up to hordes of orcs and other unworldly creatures.

7) Braveheart Wallace sword, carried by Mel Gibson to FREEEEEEDOM! One of our favorites. When Wallace's bride is executed for assaulting an English soldier who tried to raper her, he begins a revoldt against the King of England, Edward I. Another two-hander that is basic in overall design with a long ricasso covered in leather so the sword can be gripped and used more deftly, but accurate to the period and well suited to its utilitarian use.

6)The Princess Bride Inigo Montoya rapier used so deftly by Mandy Patinkin. Say it with us, "You killed my father, prepare to die." You can't have much more fun with a blade than the duel with the Man in Black. A sick boy's grandfather reads him this romantic adventure of a farm boy turned pirate who stops at nothing to be reunited with his true love. This stunning rapier is so prominent it’s like a character on its own. The gold-plated hilt with its jeweled basket is remarkable and the strong, but slight blade was wicked fast. 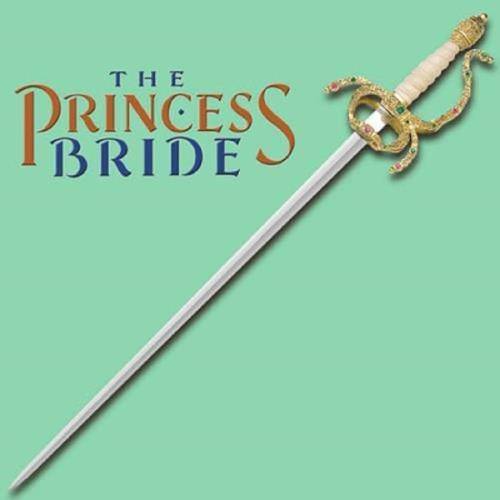 5) Excalibur , wielded by none other than King Arthur himself (Nigel Terry). Merlin the magician helps his charge, Arthur Pendragon unite the Britons. King Arthur battles to a peace and creates the Round Table at Camelot to ensure it lasts. But dark forces are at work and the peace is shattered. Excalibur is one of the more iconic one hand Medieval swords and is simple in overall design. It's understated elegance and near indestructibility makes it a hit with us. 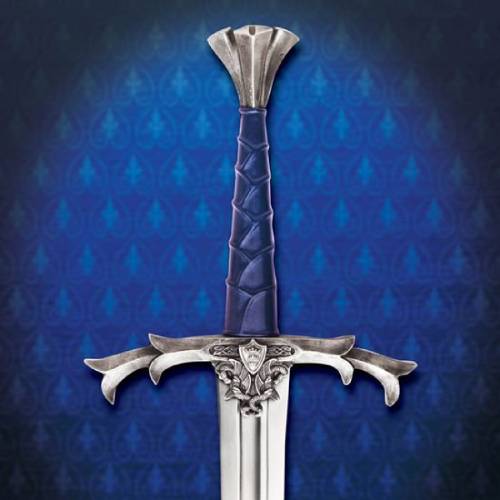 4)Kill Bill Hatori Hanzo carried by the bad a$$ bride Uma Thurman. The poor bride was left for dead after multiple assassin's attack her and her wedding party during rehearsal. But love and sheer will be hard to kill. After she awakes from a coma this former assassin goes after all who betrayed her with savage fury. A custom Hanzo katana made for a modern Samurai that takes out any sword in its path and exacts its bloody toll. 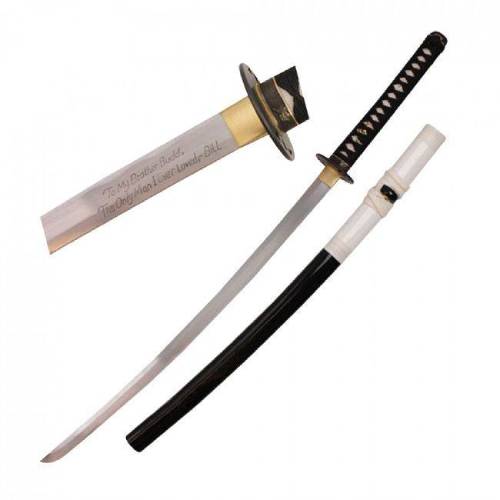 3)Highlander probably still beheading to this day. Used by Conner Macleod, because there can only be one. (Christopher Lambert) Sounds improbable, but you don't question it as this movie ramps up with plenty of exciting duels. An immortal Scottish swordsman must confront the last immortal opponents to keep mankind from falling to the hands of a murderous barbarian also out for the "Prize". The only way to die is by having your head removed which is what this beautiful dragon head katana does so well. One of the first Western films to show the katana as nearly magical in its strength and use. 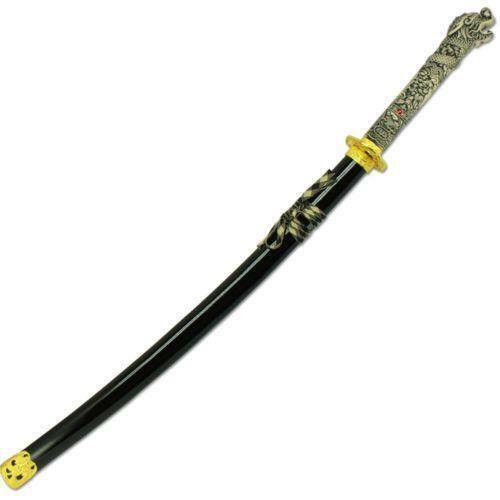 2) Conan Atlantean used with crushing effectiveness by Conan the Barbarian played by Arnold Schwarzenegger. A classic we love to this day and one of the most iconic and recognizable fantasy swords ever made. The details of Atlantean beasts on the cross guard are stunning and amazing on this massive two-hand sword which only a true warrior barbarian could wield. Conan becomes a slave when just a boy when his parents are killed and he grows up in the fighting pits which gives him the size, strength and skills to take out any opponent. The memory still burning in him of his parents death drives him on an adventure to avenge them and destroy the evil sorcerer, Thulsa Doom.

1) Star Wars Lightsaber carried by any warrior worth their salt by Sith and Jedi alike. Pick any of the movies, but it all started with A New Hope. Immature farm boy Luke Skywalker joins forces with Jedi Knight Obi-wan Kenobi to save the galaxy from the Empire's planet destroying Death Star. Along the way they pick up some help from a cocky pilot and wookie to fuel the rebellion and rescue Princess Leia from the evil Darth Vader. You just can't go wrong with a laser bladed sword of any kind. 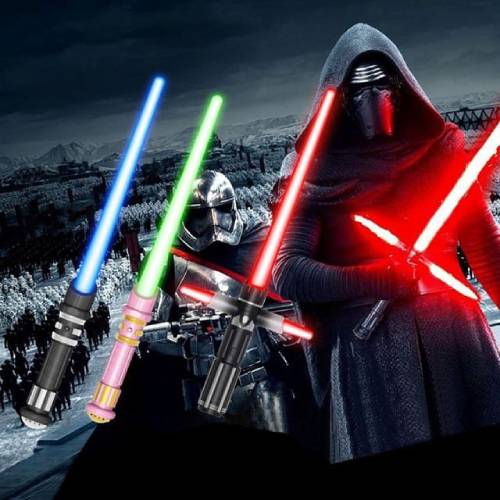