For many years, the folks at Cold Steel have spent time developing a knife fighting method that allows the properly trained fighter to vanquish his enemy with minimal risk of being cut or stabbed in the process. During the developmental period it borrowed heavily from Western Fencing, and Filipino Martial Arts, including Lameco Escrima, Japanese Ken Jitsu, and Western Boxing as well, with personal techniques and methods used as well.

The result of this effort is a knife fighting method which stresses the avoidance of close range in favor of long range techniques aided by footwork, rhythm, timing, speed and superior tactics and strategy. This basic course  has been condensed onto 3 DVD's so you can now study, and train in the comfort and convenience of your own home. If you study them faithfully and practice diligently with a training partner, you will gain the skill and ability necessary to give you a huge advantage if ever forced to defend your life or a loved one's with a fighting knife. 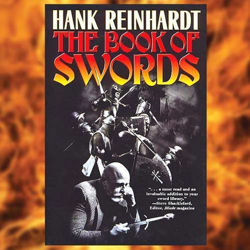 "The Book of Swords" Paperback By Hank Reinhardt