As you can imagine, millions of French people all over the world celebrate Bastille Day, a holiday that honors democracy and equality in France. A symbol of power and unity to those struggling against tyranny.

On the day of July 14, 1789, which was early on in the French Revolution, mobs broke out in protest against the monarchy. One such mob stormed the Bastille Fortress in Paris. Why? It was a main source of weapons and gun powder, the citizens could arm themselves and fight back against the well organized military efforts to police them. They also freed many political prisoners which helped fuel the fire in the bellies of the populace.

The mob made a very public statement against the food shortages and the oppressive regime they faced which rippled through the ranks, by killing the prison's governor, beheading him and infamously putting his head on a stick to parade around, a sign no royal office was safe.

The French monarchy saw first hand the people embrace the revolution's motto - liberté, égalité, fraternité, or liberty, equality and fraternity, and this forever changed the political and social structure in France.

The reasons may be different at times, but we can all understand and appreciate uniting and fighting for a noble cause. Today it is celebrated all over the world with parties, parades and fireworks. The parties stand out to us as they are often costume parties. Should you get the chance to attend one, you'll want to check out Museum Replicas extensive collection of men's and women's costumes, jewelry and accessories which can enhance your evening in a historically accurate and stunning way. 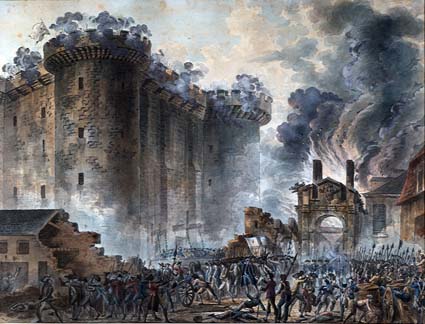 Who Were the Musketeers?

Little represents the glory, power, and strength of France better than the musketeers. Romanticized, idolized and immortalized by modern movies, books, and legends, the musketeer has taken on an almost mythological status in modern minds – and for good reason. Their prowess in battle, dashing style, dangerous lifestyle and romantic demeanor all seem to represent the perfect qualities of a man. Women wanted them and men wanted to be them. This view, however, is only accurate for a very small selection of musketeers throughout history.

The name “musketeer” applies to soldiers from all over the world whose primary weapon was the musket, a precursor to the rifle. It was a muzzle loading, smooth bore gun which was only accurate out to 50 to 100 yards depending on the target. Nations all over the world equipped their infantry with muskets that, with the addition of the bayonet, made both pikes and older gunpowder weapons obsolete. Musketeers became the rank and file soldiers of any army, the basic infantry.

The immortalized image of a musketeer, however, refers to the French Musketeers of the Guard, an elite group of soldiers consisting entirely of skilled nobles or the high elite of the common soldiers. They defended the king and his household in addition to taking part in almost every French campaign in the 17th and 18th centuries. They were the best of the best; the cream of the crop. Their days were spent training or on guard and they received the best of everything. In war they were rightly feared and their presence could turn the tide of a battle. In duels they were deadly with their pistol or trademark rapier  and main gauche. Many competing nobles lost their lives in honor duels with these elite musketeers.


Highly influenced by Renaissance style clothing of the time, the musketeer tabard with the cross and fleur-de-lis crest combined dashing style with daring and adventurous practicality. Leather gauntlets and black suede boots along with an undershirt, dueling pants, and a leather cavalier hat completed the look and created a powerful symbol of the ruling French monarchy. Cardinal Richelieu organized a personal musketeer guard for himself and gave them the blood red tabard. Ruthlessly putting down revolts and political opponents in the French government, blood red became a disturbingly accurate color for his “reign” as the king’s chief advisor and right hand man. A black colored tabard appeared in Alexandre Dumas’ The Man in the Iron Mask. 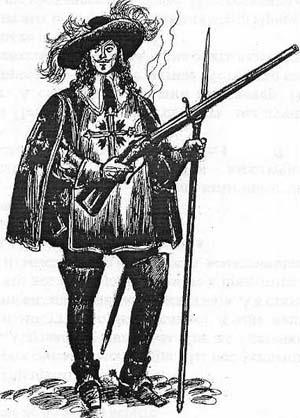 Their numbers ranged between 150 and 300 depending on which point in history one is looking at, they were nevertheless a highly reliable and powerful fighting force. Able to fight on foot at long range with a musket or pistol as well as in close, hand-to-hand combat with the rapier and main gauche, the Musketeers of the Guard were ready for every situation called for. In addition to being on foot, they were skilled horsemen and could both fire and fight from horseback. They were eventually fully disbanded in 1816 after 200 years of service as the French government could no longer finance them.