When a new road was being constructed in Langeid in southern Norway's Setesdal valley in 2011, workers discovered an ancient Viking burial ground. Along with coins and a broadaxe, an archaeological team exhumed a startling, unique sword that hadn't seen the light of day for over 10 centuries. Thousands of Viking era swords, in various states of completeness, have been discovered in Norway, but not one of them has an elaborately inscribed hilt like the one exhibited by the weapon they found that day.

Whether the sword originated in Norway or is possibly an Anglo-Saxon weapon that was acquired elsewhere is a matter of conjecture, but there's no doubt this was an expensive example of deadly artistry that was highly prized by the Viking warrior who owned it. The pommel and downsloping guard are emblazoned with gold and copper, displaying a mixture of Latin characters, Christian and runic symbols whose exact meanings are lost to time, with some characters apparently reversed for the sake of symmetry.

The Latin letters are among the hardest to interpret but may be meaningful abbreviations for Christian messages. They could be anything from Bible verses to worship of Christ in Greek or Latin, somewhat equivalent to Christograms. A cross or "X" may represent Xristos (Christ). "R" occurs in several places and may stand for Rex (king). "H" appears once, and its meaning is rather uncertain. The "E" sign is depicted in various orientations, but its meaning is also mysterious. One character that appears to be a rune might be a stylized "S". The top of the pommel in portrays a hand holding a cross, possibly representing the hand of Jesus or God. The cross in the hand combined with the "S" sign may, if interpreted loosely, be read as Xristos Salvator (Christ the Saviour), but would then represent a mixture of Greek and Latin.

Interestingly, the grip of this sword is one of the shortest known, only a hair over 3-1/2". Short grips are very common among Viking swords that have severely down-sloped guards like this one. The owner had either to rest his pinky on the pommel or possibly let his index finger and thumb embrace the guard (as an aside, Viking warriors were known for letting the pommel slide into their palms during a swing to extend the effectiveness of a blow).

This faithful replica is a fully functioning sword with a carbon steel blade that's battle capable like the original. The pommel and guard are silver-plated steel, and the markings are reproduced in real gold and copper with a slightly "distressed" look. We've added ornate ferrules to the edges of the grip in place of the original wire to aid durability. We've extended the length of the grip for the sake of comfort, but the wire-wrapping is twisted in the same patterns that a prominent Viking hand wielded centuries ago.

The original scabbard had long since deteriorated, so we created one of high-quality leather and laser-engraved it with a pattern borrowed from the pommel imagery. The scabbard comes with its own belt.

Write a Review
Write a Review
Is this even real?
Pre ordered this when it was first up. Havent heard anything about it!
- Russell, September 14, 2022 | Verified Purchase
Was this review helpful? Yes No (0/0) 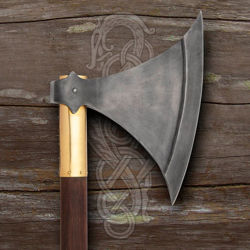 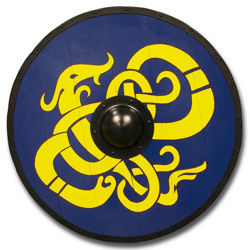 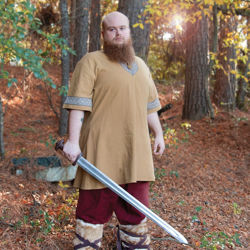 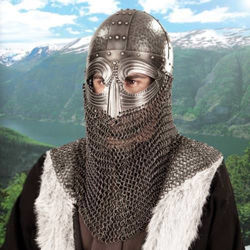