There were seven Crusades in all, dating from 1095 to 1291, with the First Crusade being the most successful from a military point of view.

The First Crusade was an attempt to re-capture Jerusalem. Christians had paid pilgrimage to the Holy Land since the time of Constantine. After Jerusalem had been captured by the Saljuk Turks in 1076, any Christian who wanted to pay a pilgrimage to the city faced a very hard time with the Moslem soldiers making life very difficult for the Christians.  Trying to get to Jerusalem was filled with danger.

Emperor Alexus I of Constantinople, modern day Turkey, feared that his country might fall to the Moslems as they were very close to another territory that had already been captured. Alexus called on Pope Urban II for help. On November 27th, 1095, Urban spoke to a crowd at the Council of Claremont in France. In this speech, considered the most influential speech of the Middle Ages, he called for a war against the Moslems so that Jerusalem could be regained. He promised that any volunteer who participated would be forgiven their sins and asked for each warrior to wear a cloth cross on his tunic.

Those who volunteered to fight the Moslems cut out red crosses and sewed them on their tunics. The French word "croix" means cross and the word changed to "croisades" or crusades. The Holy War was begun. 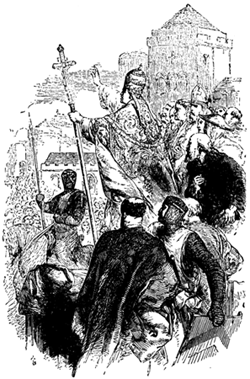 The Taking of Antioch in 1097 (The First Crusade)

After a difficult four month march through hostile territory, the Crusader army reached the plain outside of Antioch, which stood on the bank of the Orontes River.  In command of the strongly defended city was Turkish Chieftain Yaghi-Siyan.  A long siege set in that it was as difficult for the Christians to endure as the Turks, with hunger and disease weakening both sides.  Finally a garrison made a determined rally to raise the siege but was beaten back by the Christian Knights under the command of Marcus Bohemond of Taranto.  Two day later a Turkish relief force coming in from Damascus was also defeated. A few days later a more serious threat to the Crusades came when a large Turkish army from Aleppo came to Antioch.  This army attacked but was defeated when Bohemond launched a charge by 700 mounted knights.

Four days later a great army under Kerbogha, the Atabeg of Mosul, arrived and encamped outside the city.  Kerboga launched a strong assault from the Citadel downhill into the city but was beaten back in a fierce fight.

The Europeans had little food and could not endure a siege, so Bohemond marched his entire force, now mostly on foot, out of the city.  Maneuvering smartly in the face of the enemy, the Crusaders advanced on the Turkish Army, which bolted almost immediately.  Thousands of the fleeing soldiers were overtaken and killed along the riverbank.  Kerboga and a few survivors from his once powerful army made their way back to Mosul.  After this decisive victory the Citadel of Antioch surrendered.  The Crusaders now stood ready to move onto their next objective, Jerusalem. 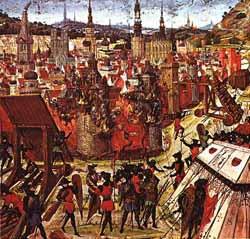 In January, the First Crusade under Raymond IV of Toulouse, Robert of Normandy, Godfrey of Bouillon, Robert of Flanders and Tancred of Taranto began the long march south from the rolling point of Antioch. By June, the Christian Army of 12,000 knights and 11,000 foot soldiers reached Jerusalem.  The city was held by a Moslem garrison under the caliph Al-Musta’li of Cairo since the displacement of the Seljuk Turks the year before.

The city was well defended behind strong walls so the Crusades began constructing three giant siege towers while at night filling in the ditch at the base of the walls despite arrows and hurled stones. When this work was done they moved the towers to three different points; Raymond’s in the south, Godfrey’s in the north and Tancred’s in the northwest.  Raymond’s assault force at the south wall met with strong opposition and was checked.  However at the north wall, Godfrey’s men fought their way across the flying bridge and got inside the walls, opening the gate of Saint Stephen. The Crusaders poured into the city, launching a wholesale massacre of the Moslems and Jews. One account reports the death of as many as 71,000 by nightfall.

The objective of the First Crusade had been achieved.  Jerusalem and all its holy places were in Christian hands, but the fighting was far from over. 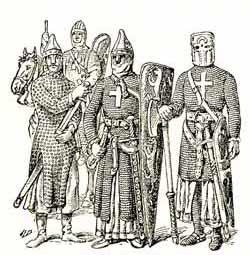 After the fall of Jerusalem, there was no one left save the conquerors.  The massacre had taken the lives of all the Jews, many having been burned in the synagogue where they had taken refuge.  All the Moslems were dead.  Any Christian pilgrims had been expelled before the siege had begun. The Moslems would never forget or forgive the behavior of the Crusaders.  Jerusalem was a Holy City to them as much as it was to the Christians.  With sacred shrines looted and innocent people slaughtered, it only confirmed their belief that all Westerners were savage barbarians.

Soon after the Crusaders had taken Jerusalem, a great army of Moslems swept up from Egypt to encamp Ashkelon on the Palestinian coast west of the holy city. Despite being heavily outnumbered by the Christians, lead by Godfrey of Bouillon, Tancred of Taranto and Robert of Normandy, the Christians took the offensive and road out of Jerusalem towards the enemy.

At dawn the knights made a sudden charge into the center of the Moslems camp and took them completely by surprise.  In the battle that followed, the entire Egyptian army was shattered with a few survivors taking refuge in the fortress of Ashkelon. When the garrison refused to surrender them, the victorious Crusaders returned to Jerusalem, satisfied they had eliminated any threat to their rule.

This battle ended the offensive phase of the first crusade, with five small Christian states being set up in Antioch, Edessa, Tripoli, Jerusalem and Galilee.
Leave your comment
Blog archive
Popular blog tags