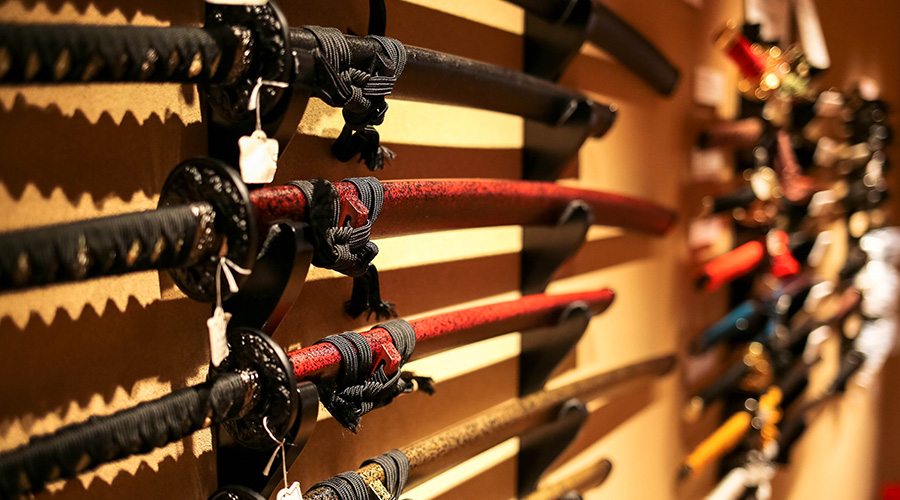 Samurai swords are iconic weapons in history as well as literature and film. The famed Samurai have used this effective weapon for hundreds of years. From Musashi to Highlander and Kill Bill the sword has taken on an almost mythic status. The handmade nature of the sword produces art and is an art onto itself. Folding the Japanese steel and differential tempering the blade gives this highly effective sword an extremely hard and razor-sharp edge while the spine remains more pliant to absorb and flex with the concussive blows a sword like this takes in practice and in battle.

The earlier Japanese swords consisted of double-edged, straight iron blades and were inspired by the Chinese Jian (one of our top ten most deadly swords). It was during 700 AD that the popular and unique Japanese Samurai swords evolved into the form that many recognize to this day. The gentle and elegant curve to the blade makes it ideal for cutting and the weight and balance inherent in the design is wickedly fast on the draw and while cutting. The detail of the handle may be what stands out most. The iron tsuba (cross guard) and the parts applied to the handle and butt cap are intricately cast and usually have a singular motif that tells a story. The katana may just be one of the most thoughtful swords from a forging and aesthetic perspective ever made.

Its production really started during the 12th century and the Samurai became a recognized symbol Bushido or the warrior’s way. By the end of the fourteenth century the Samurai sword was effectively standardized in accordance to the regulations of Tokugawa shoguns. A set of standards to follow not unlike the chivalric duties a European knight lived by. To this day it is arguably deadliest martial arts weapon. So much so it was carried through WWII by Japanese officers and used with great effectiveness in the modern war it seemed out of place in.

After more than 200 years of fighting the quality of the swords began to deteriorate, because the makers focused on mass production and cost, rather than quality. This led to a decline in some of the old sword making techniques. Although they served their purpose, they could not come close to matching the quality a master smith with the right tools and time could produce.

Ironically, the best and highest quality swords were developed, or should we say re-discovered after peaceful times returned to Japan. During the 16th and 17th centuries through today most sword smiths have gone to great lengths to research and rediscover the proper sword making techniques of their ancestors. Sadly, the sword smiths were not able to continue this for a long due to the 1876 the Haitorei edict which effectively banned people from carrying swords and guns on the streets. The police and military officers serving in the imperial army were the only ones permitted to carry swords.

Today, there is a bit of a renaissance in the production of good quality Samurai swords. It is easier than ever to own and collect this iconic sword made with traditional techniques. Museum Replicas carries many fine examples at many price points for the beginner to advanced collector and practitioner of the sword arts. From decor to practice we are happy to help you in your selection of the perfect katana for your needs. And although still capable of doing what it was originally made for, most consider the Samurai sword an object of art to be admired while it tells an intriguing story which allows the owner to relive and honor the past. A wonderful mix of traits that even non sword folk find can find curious and interesting.

Have a look at our samurai swords collection-