The Renaissance is timed differently depending on the country, but generally saw similar advancements in warfare and weapons. The 1400’s to 1500’s saw military technology which both provided unheard of protections with the addition of plate mail to chain, but also saw ways to get passed those defenses. Hand-to-hand battles were beginning to be replaced with more remote and devastating technology which could do more damage from afar. Artillery and personal firearms helped in a time when siege warfare was at a peak.

The sword was no stranger to evolution during this time and it evolved from being a slashing and cutting weapon to one that could pummel, pierce and even break through plate armor. The size of the swords also advanced to suit specialized fighting styles from the huge two handed Zweihänder and bastard swords to the hunting falchion used for close quarters combat and in the field for sport.

Sword centers of the old world which included the manufacture of complete swords as well as blades alone were Spain (Toledo and Valencia), Germany (Solingen and Passau), and Italy (Milan and Brescia).

There were specialized swords for many purposes; the ingenuity of the day rivaled ours. But rather than go into all variants, let’s look at a few that had lasting impact during this time- 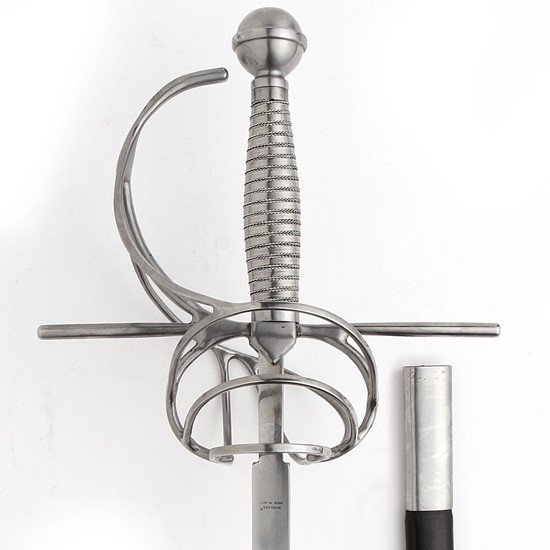 Perhaps the most romantic sword of its day, the rapier was significant not only for its use, but had just as strong a role in defining station and prestige as a key civilian fashion accessory. Spain is often noted as the first country to introduce the rapier in the 1400s. This style transformed the sword into a status symbol rather than just a tool of war. A gentleman was considered almost naked if he didn’t wear such a symbol with civilian dress. Not wanting to fall far behind this trend, most of Europe adopted the rapier soon afterwards.

The rapier really hit its stride during the early 16th century, but it was a hundred plus year journey. In the 1400s, you could see primitive steps in the form of a knuckle guard and forefinger rings. By 1500, blade smiths skills progressed and a series of bars were added to form a fuller protection area for the sword hand. The blade also progressed from the bulky wide cut and thrust blades to elegant, quick and slender thrusting blades which were very effective for dueling. Although not ideal for heavy combat, this didn’t matter as it was viewed primarily as a civilian sword which was used in the “civilized” sport of dueling. The prestige that could be gained and shown through a stunning rapier was an indicator of wealth and status, not unlike a Rolex or Porsche today (and cost nearly as much!).

The Estoc or Tuck Sword

One variant of the rapier was the more practical tuck. An everyday mans rapier with simpler hilt that was stiff with a diamond shaped cross section and needle-like design solely for thrusting. Known to the French as an estoc and to the English as a tuck. The estoc featured a longer grip for leverage and momentum when punching through armor and mail. Although it had no discernible cutting edge it was adequate for parrying when needed.

The Hand-and-a-half or Bastard Sword 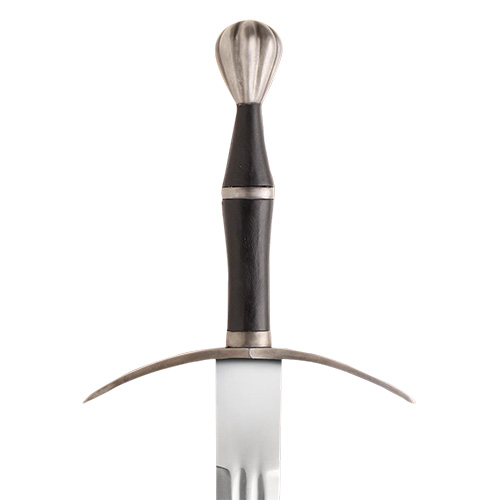 The hand-and-a-half sword was a middle ground, an attempt to blend the benefits of the two hand broad sword with the dexterity of a one hander. The name bastard was applied a bit later as it could not be classified in the two hander or one hander families. The grip area was longer which provided more momentum and leverage as a second hand could readily grasp it or the pommel for more powerful blows. Yet the blade was sized more to a one hander which was lighter, allowing for effective usage with a single hand. 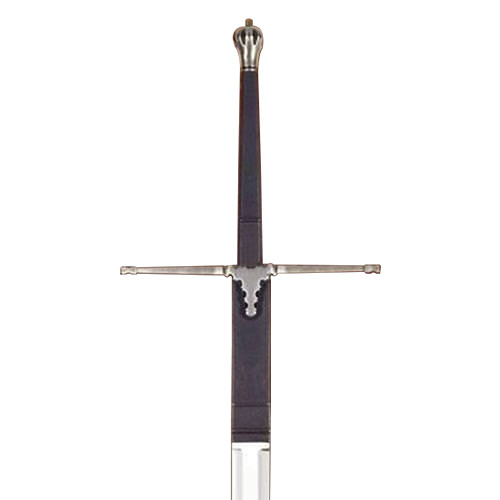 Very large broadswords called Zweihänder or two- handed swords, became popular during the 15th and 16th centuries, and are probably best known for their association with the famed Landsknecht. Their swords had a length of up to 6 feet and could weigh up to 7 lbs.! The hilts were massive as well to counter the oversized blades. The sword worked well as a lance to protect against cavalry charges and was extremely effective at breaking up ranks of infantry and pikemen.

A fun aside is another sword favored by the Landsknecht, the Katzbalger (cat-skinner), a short sword that was sturdy and wide-bladed, with a distinctive “S” shaped guard. The sword’s name is thought to derive from real world experience. It would have been a weapon for close quarters combat and possibly of last resort when the soldier would literally have to fight like a wild cat to survive. 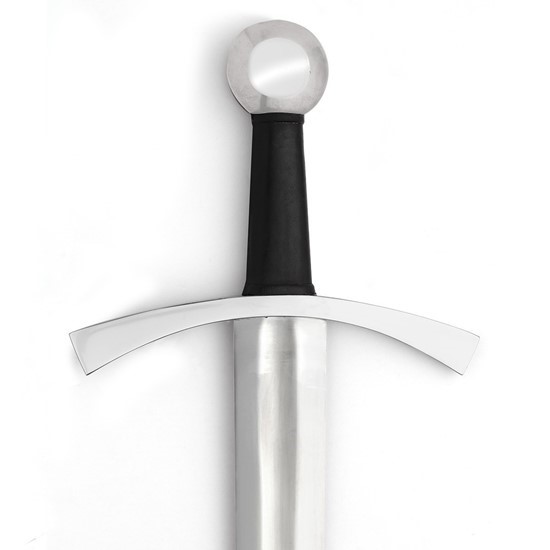 Falchion- although the basic design was from ancient Greece, the sword had a comeback during this time due to its simplicity, ease of manufacture and function. Featuring a stout, short blade which could be straight or slightly curved and a simple cross guard (or none at all), it could be easily mass produced for the infantry. Carried by many soldiers, it was strong and powerful, and as a result was also good for chopping chores around camp. Because of its short blade, ease of maneuverability and utilitarian function, it became a go-to blade for sport like hunting.

Favored by the nobility since the medieval period, Renaissance hunters continued this pastime enthusiastically. The chase and final kill with a sword were a thrilling event, dangerous for prey and hunter alike. The trousse variant combined a set of skinning knives into the sheath while the main blade may have a saw back spine added to help field dress the kill.

Another distinctive short sword was developed around this time in Italy. The shape and form of the cinquedea typifies the period’s belief in simple function combined with artistry with elements from the classical world. Its main distinction was a very wide blade at the hilt which was to be of “five-fingered” span tapering sharply to a point. Because of its wide blade, it gave a canvas of which to add fullers, engraving and other decoration. The sword would have been worn at the small of the back so it could be readily drawn by the left hand.

As the sword grew to be a symbol of rank and status it has continued to be used, even to this day, at military and coronation ceremonies. Medieval swords had fallen out of favor in battle, but the simple cruciform design still symbolized a more chivalric, knightly time that exuded honor and allegiance. This cross shaped sword was used as the canvas to show off elaborately decorated themed motifs. This tradition was upheld for centuries and many historic towns in Europe still cherish these swords. The earliest recorded still in existence is found in England dating from around 1373.

Knowing the power and mystique the sword still held over the populace Renaissance popes commissioned incredibly elaborate versions as signs of divine right.

Swords of Justice and Execution were sometimes one and the same. Great swords (two handers) served a very different duty in the judicial system and could signify both justice and act as punisher in the eyes of the law. Many courts of justice placed a large bearing or executioner’s sword on the wall as an omen to those accused and a warning to others of what could happen should you cross the line. The executioner’s sword was a practical tool used for beheadings, while smaller weapons like axes were used for appendages. Not to be outdone by other swords they could be highly decorated also and often had engravings with prayers for the condemned, or that eased the conscience of the wielder and also could have religious pictures or other forms of death and torture.

Fairly common in Renaissance Europe, particularly Germany, the sword was a traditional cruciform shape with a large hilt for leverage. It was strongly constructed, with high-quality materials; it wasn’t necessarily poorer quality just because it was only prisoners that met their fate with it. Royalty did not always fare so well in those days either! It was a requirement of the executioner to keep it well-honed so the job could be done with less pain and in one fell swoop. The more money you could offer for a swift stroke the better. A more painful death to those that could not afford it or were so disliked the executioner would leave the blade “as-is” which sometimes meant the pain and degradation of multiple strokes. Blades were broad and flat with rounded tip. The sword was designed for one thing, so the extra effort to hone a fine tip was unnecessary.

A sword could be a weapon of war, symbol of hope and justice or brutal tool of punishment. Today we see it through the eyes of authors and film makers. We encourage you to do your own research and learn about the sword and its history, which as it turns out can be much more interesting.

Want a more intimate idea of what they were like? Museum Replicas is the ideal place for sword lovers and collectors of history.