Taking place during the Persian-Greek Wars around 480 BC, there is probably no better known battle from the era.  Thanks to fanciful re-tellings, especially lately from many sources including books like Steven Pressfield's Gates of Fire and Frank Miller's 300 it seems any student of militaria knows Leonidas and Xerxes very well indeed.  As usual, the gruesome reality was not romantic at all.  That said, it was just as heroic. 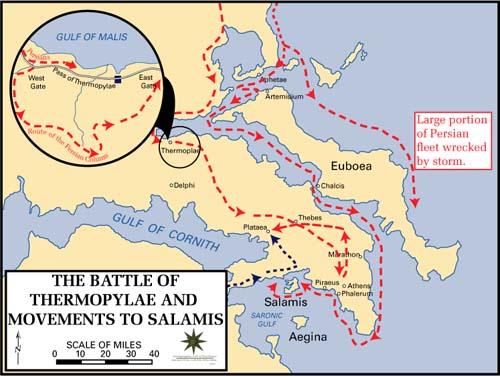 Thermopylae was a geographical bottle neck, a funnel to Greece that made it easy to defend with few soldiers.  The pass allowed 5,000 Greeks to take up very strong positions and hold the advancing horde of Xerxes and his 100,000 Persians at bay. After three days of brutal battle and growing feelings of confidence (and taunts) from the Greeks, the increasingly frustrated Xerxes managed to get a sympathizer to turn traitor.  The traitor had valuable information regarding the pass and was able to show the Persians a route through another adjacent pass that led to a flanking maneuver that would end the battle decisively.  Despite their unflinching bravery and fierce weaponry which no doubt included falcata's, Hoplite swords and Lakonia swords, spears, Kopis battle daggers and impressive shields the numbers eventually overcame the Spartan rear guard.

Leonidas I of Sparta along with 300 devoted Spartan followers lived their creed to a man- "come back with your shield or on it".  Although heavily outnumbered they valiantly held the rear guard against the advancing army long enough to sway future engagements between the Persians and Greeks.  Giving their lives allowed for the Greeks to fall back safely and re-organize.  Although all 300 fell, their sacrifice allowed the Greek states to fight another day.

Despite suffering many casualties of his own, Xerxes did continue his advance until he finally saw his forces defeated in a great naval battle at Salamis.

Public monument of King Leonidas and the 300 Spartans at Thermopylae