A Feat of Arms

A very notable feat of arms took place on the morning of August 24th, 1346, in the marshy estuary of the River Somme.  The small and starving English army of Edward III was in desperate need to cross to the north side of the river as staying where they were on the south side kept them bottled up between the sea and the river.  But that wasn’t the worst of it, for there was also an enormous French army waiting to route them.

There was a ford called Blanchetaque which was passable only at low tide and Edwards advisors informed him that on this day low tide would be at approximately eight o’clock.  On this news, Edward began rousing his small band at about five to give them enough time to break camp and move on in a somewhat orderly fashion.  As they prepared and waited on the low tide they watched with trepidation as the larger French force which had taken up a strong position on the bridgehead of the north side, readied to receive them. 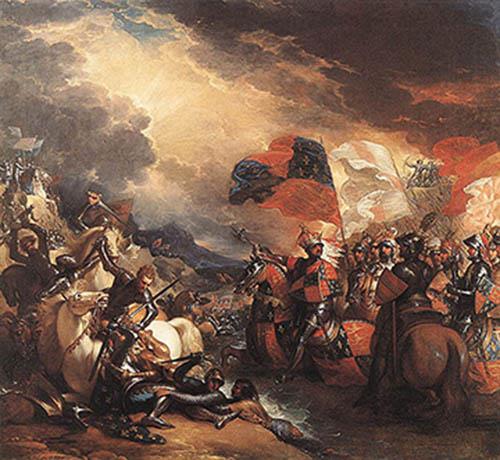 Before the water was shallow enough for infantry to cross, the French men-at-arms, sensing an easy victory, splashed into the river with great enthusiasm.  Some 500 of them under the leadership of Godemar du Fay, which up until that point had shown himself a very capable captain. Like the gallant idiots they were, they gave up their strong positions and thought to surprise the English into a surrender.

A hundred or so English knights responded and rode out to meet them, led by the Earl of Northampton and Sir Reginald Cobham.  As a result of this aggressive and ultimately poorly timed attack by the French a furious battle ensued- all in the water!  Wearing armor soaking wet is a downright miserable experience and this must have proven horrible for each side.

However, as so often happened in this first part of the Hundred Years’ War, a small force of English knights was generally enough to see off a larger force of French.  By this time the tide had taken the water to a level that it could now be crossed.  The French cavalry supported by another 3000 infantry began to mobilize and sought to finish the battle.  About halfway across they noticed enough land had been exposed to allow English archers to mobilize and fan out.  What they saw next must have shocked them.  The archers loosed a thick, controlled volley of deadly arrows that appeared as a dark cloud in the sky.

The French soldiers had frightfully little experience against such a weapon, and the carnage was devastating, causing most of the remaining French not struck down to turn and flee the onslaught.  Some stayed, but when they saw the sky darken from another cloud of deadly arrows they turned and ran as well.  The disarray of the retreat broke the cavalry and pulled them back into the retreating flow of infantry. 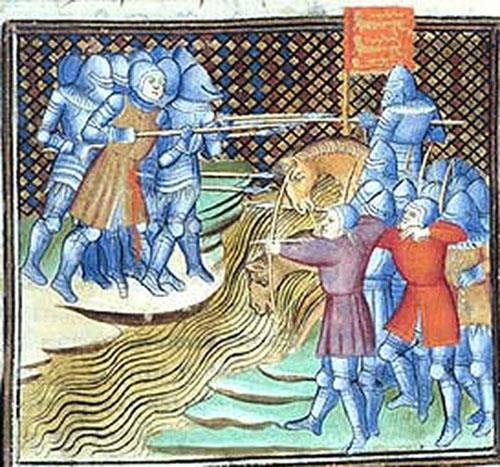 The English knights, although there were few now, sensed the turn in fortune and gave chase slaughtering horrid numbers as they crossed the river unopposed.  The unexpected turn of events leading to this English route proved to be a pivotal point in history.

The Battle of Crecy only two days later was much more dramatic and overshadowed this small, but hugely important victory.  For had this skirmish not taken place so successfully for King Edward, there would have been no Battle of Crecy, no siege of Calais- and indeed, no Hundred Years’ War.

Author’s note: This battle and the results would be lost to many, including myself, had it not been for the guidance and research of the esteemed Ewart Oakeshotte, who provided much of the colorful detail in our correspondence years ago- more so than I ever could.