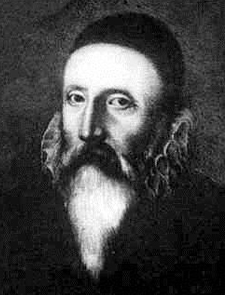 John Dee (1527-1609) and Edward Kelley developed a language, supposedly dictated by angels during their scrying sessions. Named after Enoch, the Biblical figure who 'walked with God', the Enochian system is said to be the tongue of the angels, and capable of controlling them. It has become the basis of many occult rituals and activities.

Below is Dees' Seal the Sigilum Aemeth (The Seal of God; TRUTH)

For many years Dee attempted to contact angels and learn what he could not find in his scientific studies (he had been arrested for studying mathematics which was considered to be a dark magic). Dee recorded the results of his scrying:

'John Dee, I am Raphael, one of the blessed and elect Angels of the Almighty; and at his will and his good pleasure, he hath commanded me to appear here at this time, to set forth the will and pleasure of the Almighty God. So if thou wilt do as God shall command thee by this message, thou shalt have all these messages, promises and wisdom, both for the Philosopher's Stone, the book of St Dunstan, the secret wisdom of that Jewel that was delivered, as thou knowest, in what manner it is plainly known unto thee.'

Dees' obsession was however never to be entirely satisfied. The angels had not yet delivered the final key to the Enochian language, but in April 1587 they made a disturbing demand. Kelley told Dee they were required to swap wives, a sin that would damn both their souls to hell. Remembering Abraham sacrificing his son for God, Dee agreed. His wife Jane, who despised Kelley, was unhappy with the idea, and even more so when she became pregnant. Wife-swapping also changed the relationship of the men, and in 1589 they finally parted company when Dee and his family returned to England. 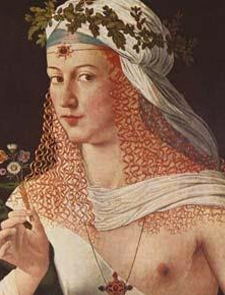 Portrait of a Woman: Bartolomeo Veneto considered to be a painting of Lucrezia Borgia

Any prince or official identified by her father as threatening the family’s status was hollow knop of a golden goblet, to cunningly secrete into her hapless victim’s cup.