Falchions were a family of single-hand Medieval and Renaissance swords that included the Messer, Storta, Braquemart, Badelair, and Malchus, among others. So named for its single-edged “falcated” blade, from the Latin falcatus and falx meaning sickle, it refers to a sword that widens or curves forward at the point. Tracing its roots far back to Greco-Roman forms, the falchion has its own distinct aesthetic. No mere scimitar from the East, this is an indigenous European sword form that came in immense variations of shape, size, point design, and hilt style. The Hattin follows one of the more popular Medieval versions, such as the famed Conyer’s falchion, with a surprisingly maneuverable convex shape matched to a classic cruciform hilt. Throughout the history of war and fencing, these robust weapons filled a much-needed role for a short powerful blade. A true working man's weapon, the falchion served as a kind of “temperate zone machete” as well as a fearsome tool of war. While sometimes lacking the cut to thrust versatility and warding capacity of a straight double-edged arming sword, it made up for it with a robust design that permitted viciously powerful blows.

The Hattin offers a sharp front-loaded blade whose center of percussion is capable of tremendous cleaving blows and chopping strikes. Yet, its center of gravity is well-balanced enough for a quick center-of rotation that gives its curved point impressive play. It is a serious cutting blade not for the weak-of-heart or weak-of-arm. Whether noble knight or common man at arms, it’s a prime example of this lesser-known and under-appreciated European sword form.

This medieval Hattin Falchion is from Windlass Steelcrafts' Battlecry collection. Designed specifically to be used and made from 1065 high carbon steel with a darkened, battle-hardened finish, extra wide tang, and tempering to a low 50s RC. This pre-sharpened blade has gone through rigorous testing. The hands-on nature of the manufacturing by master smiths makes this line unique. Includes a matching scabbard with belt stop, and a certificate of authenticity signed by each smith that touched your blade through every step of the forging process.

Write a Review
Write a Review
Not a perfect representation but solidly built
Full disclosure: I bought this as munitions grade from Kult of Athena.
If you're looking for you first falchion this is a solid choice, however as stated in the title it's not perfect there are 2 main issues I have with it. #1: The blade has barely any distal taper in the first half, making it feel chunky for its length, though the blade is thick enough that you could have it reground to make it closer to a historical original. And #2: The included scabbard is just leather, so it's not great for long-term storage. Beyond those I would solidly recommend this because of the rectangular peen and Windlass' tempering
- Caleb, August 01, 2022
Was this review helpful? Yes No (0/0)
Unique and well done
It's hard to find a good reproduction falchion, especially at this price point. The Battlecry series in general is high quality and if you add in a servieable scabbard and a free sword frog it makes the overall value sky high. The weapon is blade forward as it should be and well constructed. The "machete style" blade is pretty unique as well. You would NOT want to get struck with this thing. Only the Battlecry war hammer and axe can compare.
- Jarod, April 20, 2020 | Verified Purchase
Was this review helpful? Yes No (0/0)
Truely a great presentation
Superb rendering of this historical weapon.  The scabbard is a little tight and does not easily render itself to drawing the weapon quickly but I expect this will resolve itself with use.
- Mike, November 28, 2019 | Verified Purchase
Was this review helpful? Yes No (0/0)
I love this sword. It feels great in the hand from the balance to the grip.
Being a falchion one would expected the sword to be very blade heavy.  This is not the case with this sword. It is very light, maneuverable, and surprisingly well-balanced.
I like how windlass chose to use a hexagon design for the handle. I find it very easy to get a secure and solid grip.
For the price range you can't find a better production Falchion.
If this sword happens to be the Deal of the Day. BUY IT!!! You will not regret it.
- Franco, August 31, 2019 | Verified Purchase
Was this review helpful? Yes No (0/0)
Must have got a lemon!
This is the first time I have been truely disapointed with a purchase from MRL. The blade has a twist at the tip. The handle componets are not straight. The pommel is not parrallel with the guard and slightly canted. The pommel also shows signs of rust under the black finish. I'm sure that most are not like this but there needs to be better quality control in place.
- Dan, January 28, 2019 | Verified Purchase
Was this review helpful? Yes No (0/0)
Absolutely Beautiful!
This blade is beautiful!  The black parts have a varied pattern to it that makes it look like stone instead of metal.  It's well worth the money if this is the type of blade you're looking for!
- Lisa, January 24, 2019 | Verified Purchase
Was this review helpful? Yes No (0/0)
A very nice looking Falchion,  I love that the designers went for a relatively subtle Type 1 A style of blade rather than the normal clipped tipped style and the blade seems very well tempered, it rings very nicely.  The stone wash finish is nice enough.  It looks best on the hilt components and it's rather comfortable in the hand.  The only negative to this sword is the weight.  It's not overly heavy and it's balance point is about 4 inches which is great, but at just under 3lbs it can feel a bit tiring after a while and it defenatly wants full arm cuts as opposed to wrist cuts.  Had they kept the weight down or given it more distal taper this would be a fantastic sword for the price, as is it's a very good, very handsome, very fun sword for the price and I would recommend it.
- Jesse, January 13, 2017
Was this review helpful? Yes No (0/0)
Actually went to the store to check this line out. They are fantastic looking! I was very interested in the falchion and viking blades. The finish is very neat although not quite stonewash, but somewhere in between. The edge was a little lacking to be called razor and the blades were all out of stock! Unfortunate, but I'm hoping to buy one soon.
- Louis, April 12, 2016
Was this review helpful? Yes No (0/0) 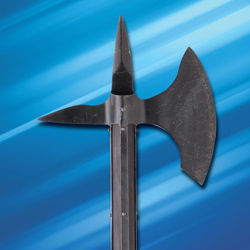 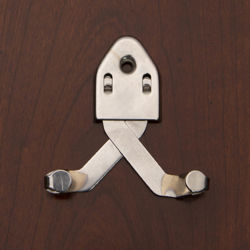 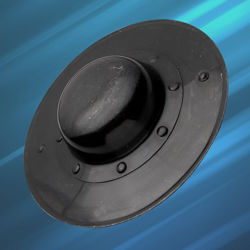