Guys, are you looking for more Halloween costume ideas? One of the timeless, tried and true outfits to consider is that of a dashing pirate! Museum Replicas collection of men's pirate costumes is certainly vast and ready to outfit the most prestigious captain to the lowest scalawag. One of the best reasons to put together a pirate costume this year is, that it doesn't have to be just for Halloween! The storybook pirate enjoys a lot more acceptance than they did so many years ago. Making their appearance at Renaissance Festivals is almost a requirement. A pirate costume is also absolutely necessary, if you ever plan on enjoying the coastal pirate themed parties that have sprung up across the globe. For instance, the Gasparilla Pirate Festival takes place every year and brings thousands of pirate enthusiasts! When putting together a man's pirate costume, you can go the individual route and make a persona all your own, or you can embody one of the many already famous pirate figures both real and fictional! Edward Teach, better known as the pirate captain Black Beard, is a popular choice and MRL gives you a head start with the Blackbeard's Coat.

If fantasy pirates hold more interest for you, there are options like the popular mascot Captain Morgan or the villainous Captain Hook, both looks that can be achieved with the Captain Morgan Coat. 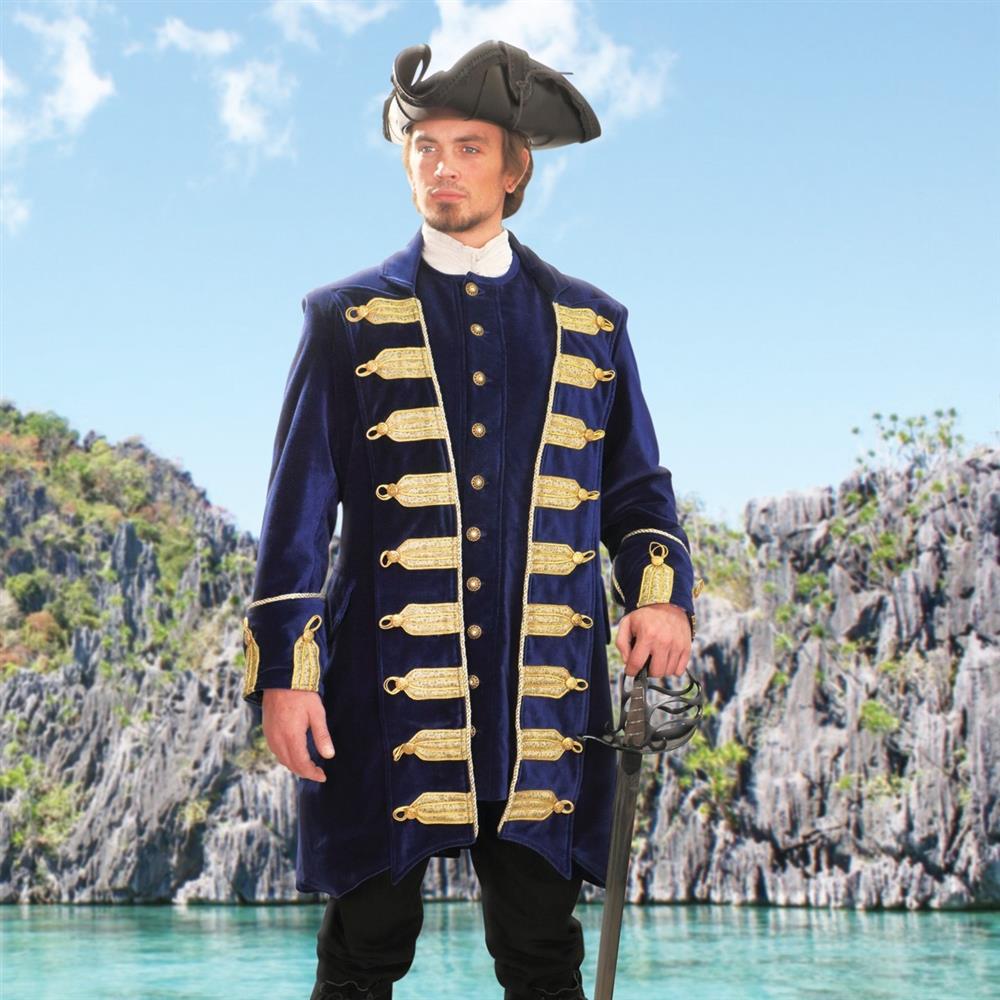 More iconic than a pirate's coat is probably the awesome head pieces that come with the territory. A simple Pirate Bandana or High Seas Stocking Cap can get the job done but something that blocks the suns rays usually wins out. Of course, tricorns rule the day, with prime examples such as the Gov'nah Tricorn Hat, Capt.Jack Tricorn Hat, Pirate King Leather Tricorn, Skull and Crossbones LeatherTricorn and many more! But being a pirate doesn't have to mean dressing to the nines.

The Pirate Vest and Scoundrel Long Pirate Vest enable you to enjoy the look without having to sweat for it. A simple Sea Dog Shirt or Tortuga Shirt will have the top half of your outfit ready to go. Of course, dressing the top and not the bottom will have you looking out of place and possibly quite inappropriate. MRL has plenty of options that perfectly embody the visage of a privateer. Trousers like the Tortuga Pants, Wayfarer Pants and apply named Pirate Pants were literally made for this role. Pull it all together with a good belt, perhaps the Wide Pirate Belt or Pirate King Belt and then you just need matching boots! Our footwear selection is especially large at this point. Journeyman's Boots, Captain Boots, High Seas Boots, and Caribbean Rogue Boots are all ready to embody the life of glory and plunder. There are many more items to see, like sashes, handsome dummy pistols, eye patches, hooks and of course, pirate swords! We've tried to make your pirate costume shopping as easy as possible and even gathered the products into one big Pirate Category! So make a costume worth your salt, for this year and many more, by shopping Museum Replicas!