The Rise and Fall of Spartacus 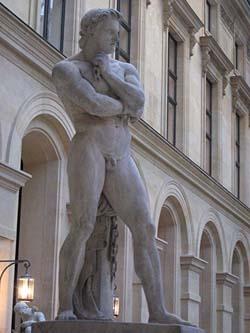 Although there is some speculation as to where Spartacus originated from, the general consensus amongst experts is that he was a Thracian from the northeastern part of Greece. Some historians claim he was an auxiliary in the Roman army who deserted before being captured and sold into slavery. Other historians claim he was just captured by the Romans and sold into slavery without ever serving in the army. Due to his size and strength he was bought by Lentulus Batiatus, a man who owned a ludus, a gladiator school, near Capua.

He trained and fought as a gladiator for an unknown period of time before leading a rebellion of 70-80 gladiators in 73 BCE. As metal weapons were forbidden from the gladiators until game days, the rebels used kitchen knives to overpower the guards. Once they were free of the ludus, however, they overran a wagon full of gladiatorial weapons and armor. They proceeded to ransack and plunder the region surrounding Capua, growing in number as more and more slaves rallied to their cause. Fellow gladiators Crixus and Oenomaus (known as Doctore in the STARZ original series Spartacus), were elected as co-leaders of the rebellion along with Spartacus.

After terrorizing Capua, the slaves withdrew to the base of Mount Vesuvius and set up camp. The Senate in Rome didn’t consider the revolt a serious matter at this point in time and sent a force of militia to quell the uprising. They besieged the slaves on Vesuvius, attempting to starve them into defeat. Spartacus showed the first of many feats of strategic genius by making ropes out of vines, climbing down the other side of the mountain and attacked the Romans in the rear, completely routing them. They defeated a second force sent against them and with each victory, the rebellion grew in number (now approximately 70,000) and gained more and more armor, weapons and other resources. The winter of 73-72 was spent training the new recruits in the art of war and by the end of winter the slaves were ready to march. 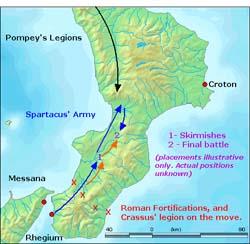 Spartacus wanted to lead the slaves to northern Italy and to freedom whereas Crixus wanted to remain and pillage the south. The grand rebellion split with Crixus leading 30,000 men to stay and ransack the country and Spartacus leading the rest to freedom. The Senate in Rome had other ideas, however, and sent two enormous forces under Roman consuls (the highest rank a Roman could achieve in the Republic) to defeat the slaves. Crixus’ force in the south was caught and defeated and Crixus himself was killed. This left Spartacus the sole leader as Oenomaus had either been killed or left earlier in the uprising. Spartacus’ force met each legion in battle and defeated each individually. 300 captive Romans were forced into a makeshift arena to fight to the death as revenge for the death of Crixus. The consular legions regrouped at Rome, launched a new attack against the slaves and were once again defeated.

At this point Spartacus does something that modern historians don’t have much of an explanation for. The road to freedom in the north was wide open for the slaves; but, they turned and marched into southern Italy in 71 BCE. A man by the name of Marcus Licinius Crassus was given command of 8 legions, totally 40,000-50,000 fully trained Roman troops, and told to end the rebellion. The size of the force proves that Rome was terrified of the slave army. Crassus split 10,000 men off and told them to move behind the slaves but not engage them. They legion commander disobeyed, attacked Spartacus’ army and was defeated.

The Roman legions finally began to win minor engagements; however, wearing down the slave’s number, moral, and discipline. Spartacus began negotiations with Cilician pirates to ferry his men to Sicily. The pirates betrayed him though, by taking the money and leaving. Faced with a rapidly deteriorating situation with the arrival of several new legions in Italy under the skilled leader Pompey, Spartacus decided to turn and launch a head on assault on the legions of Crassus. He was finally soundly defeated and the slave army broke up with every man, woman and child running for their lives. 6,000 slaves were captured and crucified along the road between Capua and Rome but Spartactus’ body was never discovered.