Always be prepared for battle! Our leather sword belts, baldrics and frogs allow you to securely carry your sword with ease. 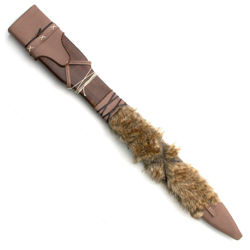 #201659
This scabbard is designed to perfectly complement your sword's imaginative barbarian/fantasy sensibilities. The semi-glossy, molded leather body of the scabbard is adorned with matte-finished leather, faux fur accents, decorative leather bands, cord, and a little brass. This expertly crafted scabbard will enhance your barbarian swagger.
$124.95 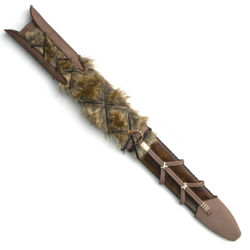 #201658
This scabbard is designed to perfectly complement your sword's imaginative barbarian/fantasy sensibilities. The semi-glossy, molded leather body of the scabbard is adorned with matte-finished leather, faux fur accents, decorative leather bands, cord, and a little brass. This expertly crafted scabbard will enhance your barbarian swagger.
$124.95 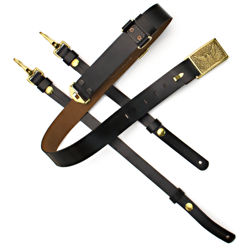 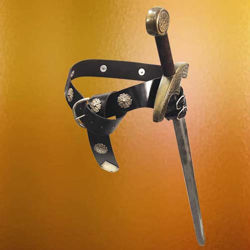 #101081
This long period belt is the best way for any warrior to carry their weapon. Crafted of thick top grain black leather, the belt features an adjustable built in frog that can fit swords up to three and a half inches in width!
$84.95 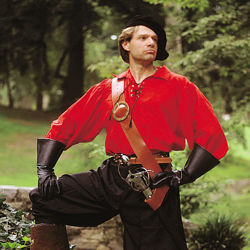 #200326
This baldric is made of oil tanned leather. Frog is left open so you can stitch it closed to fit any sword size. Features brass buckle.
$58.95 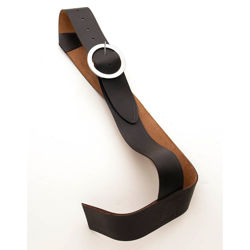 #200292
This baldric is made of oil tanned leather. Frog is left open so you can stitch it closed to fit any sword size. Features silver buckle.
$58.95 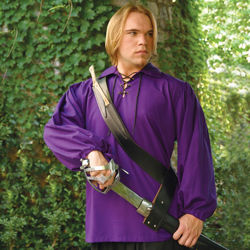 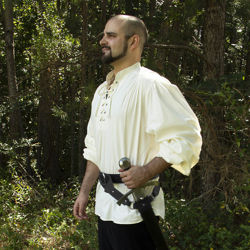 #200454
This double wrap belt is crafted of top-grade leather. Includes frog hanger to fit most scabbards. Available in brown with brass buckle and studs and black with nickel silver buckle and studs. Measures 1-3/4 inches wide.
$47.95
;

Well done Museum Replicas.  This is what I was looking for to accompany my Basket hilt Claymore.
Reviewed by: Mike, November 28, 2019

A great belt.  I made the mistake of ordering this as L/XL as I was thinking I wanted to make sure I had a lot of left over belt to have that hanging effect.  I'm a 34 waste.  I should have bought the S/M size.  But this works.  I just added my own holes to it to make it fit better.
Reviewed by: Tony, July 22, 2019

Well made. Holds my hand and a half sword well.
Reviewed by: Gregory, December 27, 2018

Good piece. As stated by others, leaving the frog open was really good in theory, until I saw the thickness of the leather...

I really enjoy the color and the quality though.
Reviewed by: William, September 24, 2015

This is well made using good quality leather, and is as advertised.  The ad clearly states that the frog is not closed.  From the ad “Frog is left open so you can stitch it closed to fit the sword of your choice“.  I don’t know how MR could make it any planner and yet two reviewers found fault because they received their frog open.  If the company had closed the frog there is a good chance that these reviewer’s swords would not fit and I’ll guarantee they would be complaining about that too, and rightly so.  If one does not have the skill and/or tools to do the job, or is just lazy, carry it to a shoe repair shop.  The job will be a piece of cake to a professional.  As for me, I put two rivets in at the bottom corners to give added support to the stitching between them.  Just above the scabbard I punched holes to accept a black shoestring as lace.  This will allow me to make an adjustment later if the leather should stretch.  In fact, one could use lace all together rather than stitching giving more versatility.
Reviewed by: Paul, July 08, 2015

I just received my baldric today and it's made of tough and durablely thick leather.  To those whining about the frog not having any closures...these people cannot possibly know what size your scabbard is.  It won't hurt you to do a tiny extra work to do a  little cutting, punch holes and lace some ties.  This is ten times better and cheaper than what you get at a ren faire, where one can see triple the price you pay for this.
Reviewed by: Eric, May 26, 2015

The baldric is very well made and looks really nice.  It is actually made from a heavier grade leather than I expected, which is always good.  Plenty of room for adjustment and will accommodate my Scottish claymore perfectly (but could be used for almost any era).
Reviewed by: Jim, August 21, 2013

Only problem picture show a waist belt not included. Looks like part of Baldric but is not.
Reviewed by: John, April 22, 2011