The Taking of Antioch in 1097 (The First Crusade) 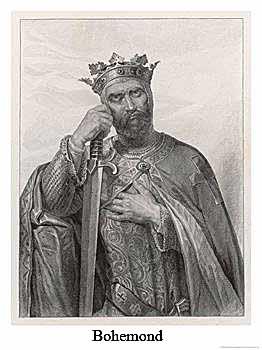 After a difficult four month march through hostile territory, the Crusader army reached the plain outside of Antioch, which stood on the bank of the Orontes River.  In command of the strongly defended city was Turkish Chieftain Yaghi-Siyan.  A long siege set in that it was as difficult for the Christians to endure as the Turks, with hunger and disease weakening both sides.  Finally a garrison made a determined rally to raise the siege but was beaten back by the Christian Knights under the command of Marcus Bohemond of Taranto.  Two day later a Turkish relief force coming in from Damascus was also defeated. A few days later a more serious threat to the Crusades came when a large Turkish army from Aleppo came to Antioch.  This army attacked but was defeated when Bohemond launched a charge by 700 mounted knights.

Four days later a great army under Kerbogha, the Atabeg of Mosul, arrived and encamped outside the city.  Kerboga launched a strong assault from the Citadel downhill into the city but was beaten back in a fierce fight.

The Europeans had little food and could not endure a siege, so Bohemond marched his entire force, now mostly on foot, out of the city.  Maneuvering smartly in the face of the enemy, the Crusaders advanced on the Turkish Army, which bolted almost immediately.  Thousands of the fleeing soldiers were overtaken and killed along the riverbank.  Kerboga and a few survivors from his once powerful army made their way back to Mosul.  After this decisive victory the Citadel of Antioch surrendered.  The Crusaders now stood ready to move onto their next objective, Jerusalem.