Clements #13 Why the Sword? 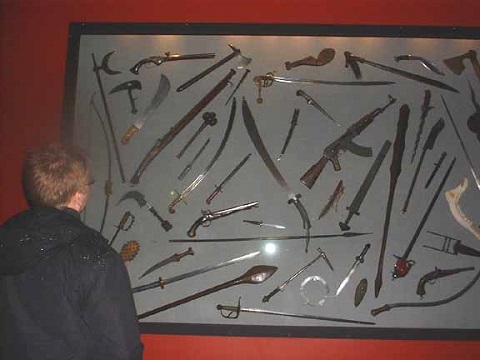 As professional swordsmanship teacher, there is a simple question that I'm often asked: why the sword? The meaning of the question is more or less asking how a long-bladed weapon came to exist in so many different forms to become so widespread and valued by fighting men throughout history? It's not an easy question to answer in brief. It's a matter that involves many inter-connected elements of warfare, close combat tactics, metallurgy, physics, and physiology, as well as cultural values and choices in personal self-defense. That's a lot of factors. To try and put it succinctly though, there is an undeniable fighting utility to metal blades wielded by hand. They stab and slash and chop better than do other materials and they also hold better up to wear and violent trauma. They ward and guard defensively to protect their users almost as much as they threaten to wound offensively. A long fighting blade is also self-evidently a greater danger than a short knife. The spear and axe and a bow all have their uses, especially at farther ranges, but closer up a long blade can outfight any of them. The situations and circumstances of which it can be used, on foot or horseback, and the kinds of garments and armors it can overcome is considerable. On top of this, it can be wielded in one or two hands and if using a single hand it leaves the other free to employ another weapon or shield. Whether for traveling on the road or going about town, defending a fortress or fighting from a battle line in the field, you can't do better than having a blade weapon either in hand or ready on your hip. In the past, a sword wasn't always the primary weapon for all fighting men in all situations, but more often than not it was the secondary choice. Around the globe among all the great civilizations of history, the technology and artistry of the bladesmith were prized for a very simple reason: swords worked and they were necessary. Is it any wonder then why there are so many sword designs?