Weapons of the Romans 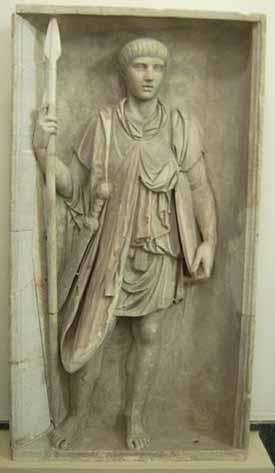 As for their sidearm, the Roman soldier was never far from his trusty short sword, the gladius (500360).  The gladius was normally worn on a baldric (200368) and slung over the shoulder to hang across the body on the opposite hip.  History shows us most were worn on the right hip for a “pull” draw as opposed to a “cross” draw as this type of draw was impeded by the scutum.  There were several patterns of gladius and it was not unusual for mixed types to be in use within the same legion.  The hilts were much alike and the blade profiles varied somewhat.  The one thing that was always the same is the fact that the broad blade was approximately 20” long and had a very keen stabbing point.  This point figured greatly into the fighting style preferred by the troops for it consisted almost entirely of an under hand stabbing motion that was most effective while in tight ranks.

The pugio (401392), or large dagger, was also carried by the legions from the time from the late Republic onward.  An interesting note is that a large variety of fighting spear heads has been unearthed and were no doubt used, but where they fit into the actual legion is not well known.