Tactics of the Roman Legionarre

The Roman soldier was unique for the fact that they fought with extreme discipline in close knit ranks, and as simple as this sounds, it went against the thinking of the day.  The rest of the world, more often times than not fought in mass too, but the battle was decided by hundreds or thousands of individual duels.  Fighting in an organized line with shields held in tightly formed ranks made for a formidable wall that was nearly impossible to breach and changed the way war would be fought to this day. 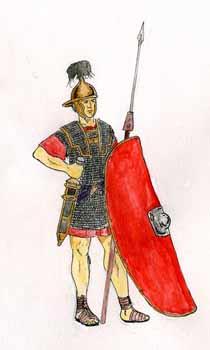 The ranks could be several men deep, allowing a fresh man to be rotated to the front when needed so as not to break the formation.  This tight wall of men was protected by the large scutum (shield) and it was common for battle to be engaged by raining pilums (spears, 600008) down on their foes.  This throwing spear purposefully had a very small head on a long iron shaft that would embed itself in its target and then bend, dragging down with it the impaled target, which was often the opponents shield.  This thin iron shaft bending held another benefit - your opponent couldn’t throw it back at you!