A hoplite’s most important piece of equipment, and what gave the hoplite its name, is the hoplon, the shield (881004). The shield was made of overlapping planks of wood covered in leather, with the face of the shield covered completely in a thin sheet of bronze. This gave it incredible strength while at the same time not making it so heavy that it became unusable. Each shield was round and approximately 36” to 38” in diameter. Worn on the left arm, it provided some protection for the owner while at the same time offering additional protection to the man to the left of the owner. Because of this, the shield became a symbol of unity as each man both defended others and relied on others for defense. The shield was so important that the Spartans implemented a system where any Spartan warrior who lost his shield was severely punished and often killed. Legend says that a Spartan warrior was given his shield by his mother and instructed to “come back with it…or on it.” This meant come back in victory with your shield or dead and carried on it.

As a shield covered a hoplite from the chin all the way to the knee, other armor was sparse. Bronze or leather greaves (881006, 200854) were worn to protect the lower legs as they were not covered by the shield. Footwear was restricted to sandals (100958) and often times the feet of an enemy were sought after for a crippling blow. A bronze breastplate, similar to our breastplate from The Eagle (888014), was worn as additional protection for the vital areas. Finally, a helmet (881002), usually a Corinthian style made of bronze, protected the head and completed the armor of a hoplite. 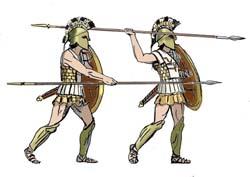 Their main weapon, not the sword as many books and movies would have you believe, was the spear (600074). Rarely thrown, the spear, between 7 and 9 feet long, was held onto providing great reach to the enemy. The lines of the phalanx would stand shoulder to shoulder; shields leading the way. The first rank would thrust from beneath the shield while the rank(s) behind would stab over it. This two pronged attack was rarely countered successfully, because if you covered up your lower body you were skewered from above and if you covered the head you were skewered from below. Any way you look at it, you did not want to be a foe facing this relentless advance.

As a secondary weapon, hoplites often carried a sword into battle. Most commonly used was the two foot leaf shaped blade of iron or bronze (500734). Also used were the falcata (500062) and the kopis (501207). The Spartans had a specially designed blade that was similar to the common leaf shaped hoplite sword except the Spartan sword was barely over a foot long (401178). It was said that the blade could be lengthened by taking a step closer to your enemy!

Finally, most hoplites possessed a cloak of some sort to protect themselves from the elements while out campaigning. Due to their full time, professional army the Spartans provided each of their warriors with a red cloak (881001) that they wore into battle. Tradition tells us that the Spartans wore a red cloak so their enemy would never see them bleed. Showing weakness was not tolerated in way, shape or form.