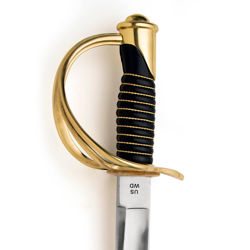 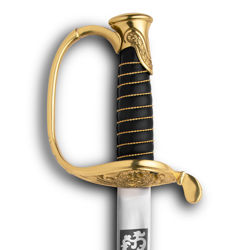 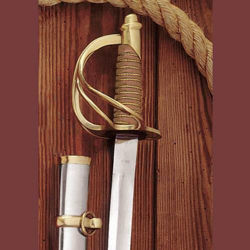 #500646
This saber has a blade made of 1065 high carbon steel and a classic Confederate "unstopped" fuller. Scabbard features brass furniture, ring mounts, and drags. Overall length of 40 inches.
$179.95 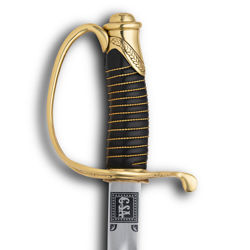 #500050
This saber has an ornate blade made of 1095 carbon steel. Features original handle and sheath materials, leather grip, and blued steel scabbard. Overall length of 38 inches.
$199.95 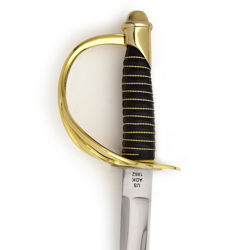 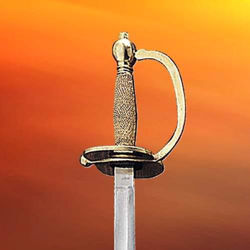 Southern and Northern forces were issued with a variety of swords depending on their fighting style; cavalrymen, infantry, artillerymen, marines and officers, all had distinct weapons - knives, swords and sabres. In course of the civil war, sword bayonets were developed - a 23 inch blade mounted on the end of a rifle or musket turned the slow-to-reload medium range weapon into an effective spear for close range work. Museum Replicas manufacters and distributes a great selection of these historic knives, sabres, swords and bayonets.

Beautiful blade! I'm using my to train new recruit divisions in the US Navy as an RDC, my only complaint is the laser engraved "made in india" I don't have any problems with blades made in india, it just would have been nice if that would have been included in the pictures before I put money on it, however it is amazingly made and I believe it will serve me well for many years to come!
Reviewed by: Justin, January 20, 2023

I am very impressed with the Windlass 1860 Union Cavalry Officer's Saber.  The polish on the blade and guard is superb.  The blade is a little thicker than the advertised 3/16 inch, which is good in my  opinion.  My sword measured .230 inch thick at the spine a few inches in front of the guard; if it were 3/16 that dimension would be only .1875 inch.  I am happy for the extra balance and rigidity that the thicker steel provides.  Altogether, this is a very fine and handsome sword.  Shipping was prompt, and my sword arrived well packed and in perfect shape.
Reviewed by: John, July 30, 2021

Absolutely wonderful.  Can be used in Civil War Reenacting or as part of a pirate costume.  I have an early original pattern 1860 Cavalry Sabre made by Ames Mfg Co.  and the only difference between that one and this apart from size is the maker marks on the original are stamped not lazer engraved.   Stamping would have been a nice touch...
Reviewed by: Mike, February 07, 2020

Handsome, elegant, ferocious.  This cutlass feels the way I would want any sword to feel.  The thanks to the profile taper the balance is perfect for a cut-centric sword with no sense of blade heaviness at all and still with wonderful point control.  Seems to match the original pattern closely and is solidly put together (the hilt is peened and seems to have the additional strength of being resined as well). The only negative is that the wire wrapping on the grip can irritate the had...on the other hand (pun!), it does cause the sword to remain locked in your grip.  This little sword has been the standard setter in my collection and continues to be.  It's also a great Steampunk cutlass for those wanting one to round off a costume.
Reviewed by: Jesse, January 17, 2017

Perfect!  Incorporating this into a gift.  Just what I was looking for.
Reviewed by: Norman, April 17, 2016

I love this cutlass.  It is well balanced and very quick in the hand.  It is by far my favorite long blade and second only to my hand forged Tomahawk.

The scabbard is well made with a handy belt frog.  I purchased the European baldric as I find it much more comfortable to wear. Plus it looks so badass!
Reviewed by: Michael, September 17, 2015

Was very satisfied with the Saber.  The quality of the product exceeded my expectation and is very well made.  I would recommend this product to anyone and would do additional business with Museum Replicas in the future with complete confidence.
Reviewed by: Robert H., June 05, 2015

I own this saber and it is a fantastic weapon. I have examined many originals and I can say this recreation is true to those in almost every respect. The only real difference is the grips are leather rather than ray/shark skin, although some originals have leather grips. Balance is spot on as is weight. This is a fully functional weapon and is great for reenactors or actual use. The blade is both a terrific lasjing blade but also excellent in the thrust. This is a beautiful and versatile weapon. Sharpening service from Atlanta Cutlery/MRL is top notch, the only issue being that they do not sharpen the false edge as on the originals which increase thrusting ability and allows for hook cuts with the reverse. If you like sabers this one is a steal at this price.
Reviewed by: Tyler, August 04, 2011

A nicely balanced weapon that almost floats in my hand. It is very fast and maneuverable in close quarters. The workmanship and fit is excellent. From the sharp point to about 8" down, it is like a knife blade. Then the blade transitions into a cleaving edge.  So you may lightly slit, deeply slice, stab, or chop with confidence. This is the favorite of my sword collection.
Reviewed by: Curtis, April 20, 2011