These versatile close combat weapons were capable of inflicting significant injury to an armored knight. The spiked end could be used to grab the reins of the horse, while the hammer was ideal against plate armor. 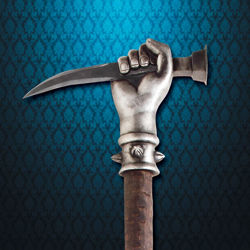 #601028
This war hammer features an all-steel head sporting both a flat-headed hammer and a deadly 5” spike. Shaft is a rustic looking hardwood. Battle-worn antique finish.
$148.95 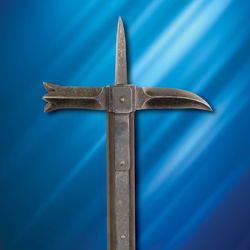 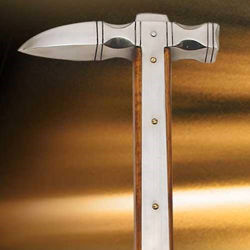 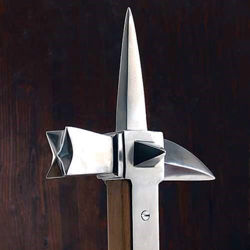 #600756
This hammer features a large end spike and small spikes on the sides. Head is attached with steel langets to the hardwood shaft which is also studded for a secure grip. Overall 26-1/2”. Weighs 2 lbs/4 oz.
$139.95 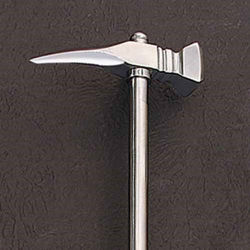 #600366
This medieval hammer is replicated from an example in the German National Museum in Nuremberg. Steel head secured to hardwood shaft with steel langets. Overall 21-1/2". Weighs 2 lbs.
$79.95 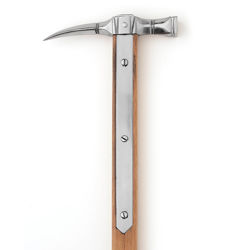 My first purchase from the Battlecry line and it exceeded all expectations! Outstanding. Solid. Massive. Love the finish!

Interesting the earlier comment about not liking the square handle. I think it's a more authentic look, and when wielding in battle chances are good that fighters wore gauntlets or at very least gloves.
Reviewed by: Kevin, March 03, 2018

This Warhammer means serious business. Totally solid, nothing loose, like the "Battlecry" look. Long enough to knock a rider off his horse and a RAZOR sharp spike for finishing the job. 500 years ago I would have felt totally confident bringing this to a real battlefield.
Casey - Florida
Reviewed by: Casey, December 19, 2017

This warhammer is built just as tough as the rest of the battlecry line. Love the finish, love the color, and it feels brutally dangerous in the hand. Only downside is that whatever they used to blacken the handle will stain your hands when you initially handle it. There just seems to be an excess of stuff  on the handle. I had to wipe it off repeatedly with a paper towel until it no longer did that. Handle is still just as black as it was, so it's all good.
Reviewed by: Derek, January 25, 2017