Battle of Marathon 490 BC - The Persian Wars

The Battle of Marathon was one of the earliest recorded battles.  This Greek victory over invading Persians gave Greek city-states not only the confidence in their ability to defend themselves, but in the belief of their own existence.

Two years earlier an invading army of Persians, after defeating Thrace and Macedonia, had their fleet destroyed by a 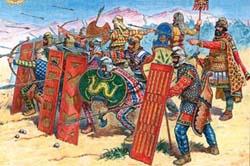 storm.  Now, a second army crossed in an expedition bent on conquering the Aegean Islands.  In fall of 490 BC, a Persian force of 20,000 soldiers, under Datis, nephew of King Darius, conquered Eretria on the island of Euboea in seven days. They then landed near Marathon, 22 miles northeast of Athens. After the fall of Erertia, Athenian General Miltiades rallied 10,000 Hoplite infantrymen and 1,000 Plataean citizen-soldiers to attack the Persians near the east coast. Outnumbered, Miltiades used his knowledge of Persian battle tactics to turn the tide in their favor.

Miltiades arranged the Greek Hoplites in a long line across the 2 mile wide plain of Marathon, with the best armed infantrymen at the ends and the ranks thinner in the center.  Without neither bow nor cavalry, the Greeks rushed at the invaders armed only with spears, swords and shields. True to Persian form, their best troops were fighting in the center, with those forced into service fighting at the ends.  The Athenian flanks then penetrated both wings of the enemy’s defense line and then wheeled inward to envelop the Persian center. Those fighting on the Persian flanks fled and the Greeks, instead of pursuing them, turned to aid their countrymen fighting in the center. Pushing from three sides they forced the Persians towards the sea.

The Greeks secured 7 vessels and lost only 192 men, compared to the Persians 6,400.  The Persians then sailed towards Athens, hoping to take the undefended city by surprise.  However the Athenian soldiers marched back to defend their city and reached Athens before the Persians.  The Persians, seeing the army already in place, sailed away. The Athenians had defeated the most powerful empire in the Western world. 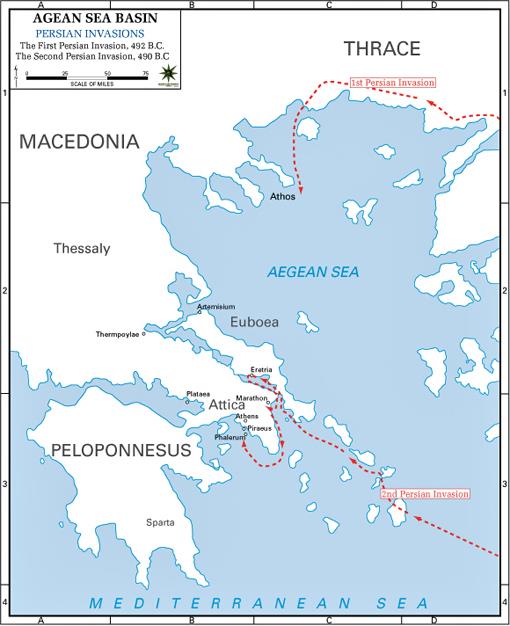